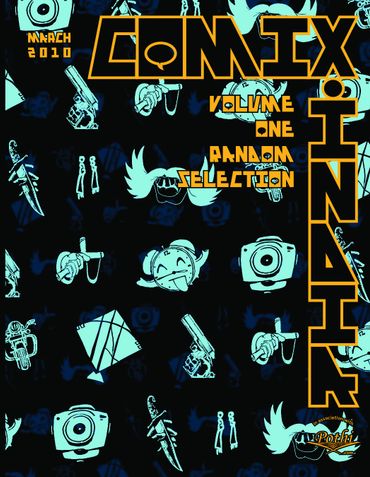 COMIX.INDIA is a multi-lingual* self-published black & white comics magazine, begun in October 2009. It is run by people who wish to express themselves in the comic form, and hope to enrich and widen the Indian comics landscape.

COMIX.INDIA VOL.01- RANDOM SELECTION contains short comics by 13 contributors, 10 of whom are eligible to an equal share of the profit generated by each sale of the book on this website, which is the only source of income for the contributors.

For the concept and guidelines for submission to the magazine, please visit https://comixindia.org/.

All correspondence can be addressed to editor(at)comixindia(dot)com.

COMIX.INDIA magazine depends on the contributions of various authors. Here are the credits on COMIX.INDIA VOL.01.

Here is an article about COMIX.INDIA in The New Indian Express-->

As an author, artist and filmmaker, Bharath Murthy used to feel his country had no platform for original, short comics. This spurred him to launch Comix.India five months ago. The multi-lingual, black-and-white indie comic magazine, floated last October, focuses on original work by Indian creators — and is gaining popularity.

Bharath first put out a submissions call for the first volume in the hope that it would stir up the nascent comics industry. Today, several submissions later, he is optimistic that the magazine will not only encourage aspiring authors and artists but will also spawn a new generation of adult comic readers. A brief glance at the artwork and stories makes one thing clear: Comix.India is trying to move away from the child-centric comics of yesterday. It’s no retelling of mythology or folk/fairy tales; here they address adult themes and issues. As Bharath points out, “there’s no attempt to dumb (Comix.India) down for a child’s understanding.” It is more likely children won’t like or be able to relate our content.

Take Dr L Prakash’s Ear Rings. The story is a true-life account of his fellow prisoner’s journey to jail. Although written in an almost child-like language, the art is stark with disturbing blotches of grey and black. That the writer is a self-taught artist is evident. Also finding space in the anthology is Sudeep Menon’s crime noir about a gangster in Mumbai called Just Another Job. These are not stories with happy endings or with a moral. Comix.India distinguishes itself by publishing entirely in black and white. While this has a stylistic purpose, it’s also a cost-cutting measure. It also encourages artists, who are not formally trained, to learn through copying. “What happens with colour and too many ‘artistic’ effects,” Bharath clarifies, “is that readers are unable to imitate the artwork. That frustrates those wanting to learn by copying their favourite authors.”

The 260-page volume is impressive in its mix of genres and the variety of artistic styles. Kinnari, a mythology-inspired story about a young man’s travels in an ancient world, is probably one of the more stylised and richer artwork in the collection. The writer, Meenakshi Krishnamoorthy, manages to marry manga techniques with Indian symbols by creating a style that both foreign and Indian. Some others are more experimental and unconventional: Sudeep’s Just Another Job tells the story through sketches as well as sketches superimposed upon self-clicked photos.

The magazine hasn’t received much support from traditional publishing companies. The loss of a major publishing house also meant the limitation for Comix.India’s budget for marketing. But this is the age of the Internet and viral marketing. The magazine was promoted on social networking sites like Facebook (600 fans) and Twitter. It also made its presence known in the blogosphere. Already, www.comixindia.com has members posting artwork, critiquing each other’s work and talking comics. The site also features a blog and a database of registered artists and writers to encourage collaborative efforts.

Graphic novels exploded on the scene in India the early 2000s; Sarnath Banerjee’s Corridor (2004) was the first among them to be released by a major publishing house. However, instead of boosting the comics industry, the graphic novel killed the short-comic form as publishers began looking at novel-length graphic projects, says Bharath. “Nobody wanted to touch the short comic — and rightly so.”

But Bharath is hopeful. Since the industry for comics hasn’t developed here, there’s no monopoly of the kind you see in, say, America. “This will make it easier to include business practices like not ‘owning’ characters, making it mandatory for authors to own copyrights.” His website attempts to do this.

A wary publishing industry is one reason why Comix.India has chosen to self-publish, using pothi.com. “Comics companies in India operate on an archaic ‘factory system…like a 19th-century industrial model,” Bharath notes. “It relied on our mythologies that lent themselves to the comic genre. A publisher only needed to find the artists to ink and letter the product. Here, it’s the company — not the artist — who owns the artwork.

Today, there are alternative venues of publication. When Bharath was first drawing comics, a number of self-publishing venues popped up and he took advantage, printing his own comics. But he noticed most fellow-artists chose to publish their works online. Bharath realised that bringing them together to self-publish a magazine could ease commercial pressure. But why self publish when one can make a webcomic? “We want to give the authors the option of getting out of the web so that their fans — old and new — can read it wherever they are. Ads popping up on the Internet page could be distracting. And, self-publishing gives the author some remuneration.”

If Volume One of Comix.India does not have a theme, with stories range from memoir to essay to historical fantasy and urban detective pieces, the second volume is on ‘Girl Power’, courtesy Bharath’s film (Fragile Heart of Moe) on the female manga artists in Japan. “We have no comics for girls in India, and almost all Indian comics are implicitly addressed to male readers.” The deadline for submissions to Volume Two is April 30.

— Anisha Sridhar writes fiction and non-fiction from her base in Massachusetts.