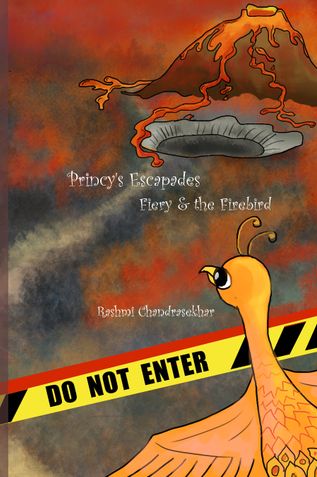 "Princy had never heard this much ruckus even in his school, during playtime. The powerful charms uttered by all the fairies, elves and pixies were crushing the glass cases that were so dangerously incubating soon-to-be monsters. The only problem was that thousands more still remained. What's worse, there were more chambers in this underground cavern hosting more of these eggs!"

In this phenomenal trickery by the underworld monsters, will history repeat itself or will Princy save the day, yet again, with help from his friends? Will they succeed in their mission against the fire giant to will the whole world go under the mercy of the monsters? Read on to be a part of Princy's journey on yet another escapade...

Rashmi is a software engineer by profession. She lives in the United States with her husband and five year old daughter. She loves children and writing for children has been a dream since she was a child herself.

Rashmi grew up in a small part of Bangalore city in India. Prior to the IT boom, her town was full of greenery, hills and open valleys. As a kid, she along with her friends set out on their own escapade each day. While she herself never encountered a real fairy, elf or other magical creature, her quest to do so as a child and the adventures with her gang remained fresh in her mind. Writing a book was a dream ever since. Her dream was finally realized in 2011 with the launch of her first novel in the "Princy's Escapades" series. She intends to write many more books in the series. Her stories always have a moral - a take away lesson for the young readers. Her goal is to make sure that children do not lose their creativity, natural inquisitiveness and their buoyant spirits in the era of computers and electronic gadgets. Through her books, she hopes to re-kindle the imagination of the children and help them grow into good citizens. Although her novels are intended for young readers, grownup readers of her books have vouched that they enjoyed reading it just as much. So, if you are young or young at heart, her books are certainly for you.

Fiery & the Firebird is her third novel in the "Princy's Escapades" series. All her novels are available from CreateSpace.com, Amazon.com and retail outlets and Pothi.com websites. You can also download her ebooks from Kindle.

All royalties collected from the sales of her books are donated to charitable causes.

Be the first one to write a review for the book Princy's Escapades: Fiery & the Firebird.

How To Knit A Dollhouse For Your Child
Sally White