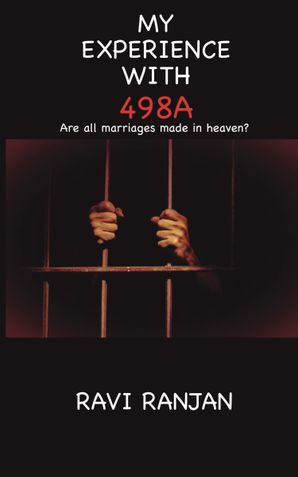 My Experience with 498A

Are all marriages made in heaven?

A failed marriage, an innocent behind the bars, an ailing praying mother, a withstanding brother, love, accusations of murder, rape, deceit, courtroom drama, a convoluted plot, but in essence a story of faith…

The backdrop:
Karan, a seasoned software professional, gets the shock of a lifetime when he gets the news that his brother Samar is in prison for dowry and harassment charges reported by his wife. He rushes back to India to help his brother in his quest for justice only to discover that it’s not going to be a fair ride. What looked like an easy trail transforms into a complex never-ending ordeal. He discovers that the laws made to secure females are being used against the innocent females itself, leave aside the ailing men. Their entire family is in deep anguish, the mother being an emotional wreck praying day and night; the close family friends doing everything from following the code to grappling with bribing just to secure bail.

Karan is rational but is his ability to analyze good enough to handle the forces that he encounters in this journey? Will Samar be able to handle what Karan discovers? Will the guilty be punished? Are all marriages made in heaven?

A mechanical engineer from BIT Mesra, Ravi is a core banking consultant by profession. He lives in Bangalore, India with his wife. An avid lover of music, Ravi pens and composes songs and plans to take it out to the world someday.

Ravi has published two books so far:
Genre: Inspired by real events, Social, Legal thriller, Suspense
My experience with 498A:Are all marriages made in heaven?

My Experience with 498A

Be the first one to write a review for the book My Experience with 498A.