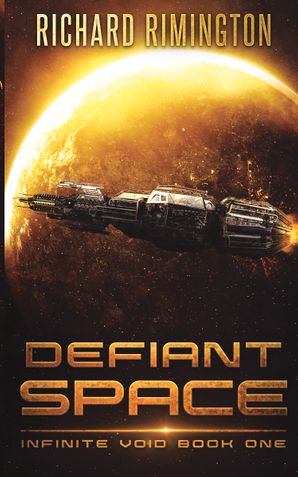 One starship against the galaxy.

The crew of Fidelity are the only hope to save their planet from destruction.

When an armada of predatory warships comes to annex their world, the inhabitants of planet Vale Reach are forced to confront the fearsome threats that stalk their galaxy. Terrors lurk in the uncharted depths of space, ready to crush their world and enslave its people. A lone starship is sent on an impossible journey. But is it already too late?

Caladon Heit wants to prevent the destruction of everything he knows. Together, the ship’s crew must overcome the ferocious marauders and brutal empires that seek to eradicate them all.

In space, they will discover a harsh and remorseless environment. Unimaginable enemies await behind every moon and asteroid. Their mission will demand sacrifices from every crew member to reach its destination.

Will they emerge with their resolve and their starship intact? Or will Fidelity and their homeworld be annihilated?

This is the first novel in the Infinite Void Series.

Infinite Void is a science fiction space-opera series, focused on a far future galaxy of cyberpunk empires and frontier societies.

Danger and suspense fill each exhilarating encounter. Many brave souls will fail. Only a tenacious few will reach their goals, and achieve unimaginable power.

All will bear witness to the wonders and terrors brought by mankind’s inevitable transformation.

The next stage of human evolution faces chaos.

More books are to come in the Infinite Void series.

Richard Rimington is a British author living in Hong Kong. He is a writer of science fiction, working for over fifteen years.
His favorite authors include Phillip K. Dick, Alastair Reynolds, Dan Simmons and Ann Leckie.

Get regular updates at https://rimmblog.wordpress.com/

Be the first one to write a review for the book Defiant Space.