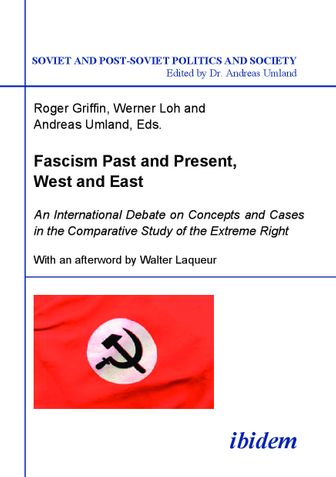 Fascism Past and Present, West and East

In the opinion of some historians the era of fascism ended with the deaths of Mussolini and Hitler. Yet the debate about its nature as a historical phenomenon and its value as a term of historical analysis continues to rage with ever greater intensity, each major attempt to resolve it producing different patterns of support, dissent, and even hostility, from academic colleagues. Nevertheless, a number of developments since 1945 not only complicate the methodological and definitional issues even further, but make it ever more desirable that politicians, journalists, lawyers, and the general public can turn to ‘experts’ for a heuristically useful and broadly consensual definition of the term. These developments include: the emergence of a highly prolific European New Right, the rise of radical right populist parties, the flourishing of ultra-nationalist movements in the former Soviet empire, the radicalization of some currents of Islam and Hinduism into potent political forces, and the upsurge of religious terrorism. Most monographs and articles attempting to establish what is meant by fascism are written from a unilateral authoritative perspective, and the intense academic controversy the term provokes has to be gleaned from reviews and conference discussions. The uniqueness of this book is that it provides exceptional insights into the cut-and-thrust of the controversy as it unfolds on numerous fronts simultaneously, clarifying salient points of difference and moving towards some degree of consensus. Twenty-nine established academics, including severalprominent experts working in English and German, wereinvited by the periodical "Erwägen Wissen Ethik" (Deliberation Knowledge Ethics) to engage with an article by Roger Griffin, one of the most influential theorists in the study of generic fascism in the Anglophone world. The resulting debate progressed through two ‘rounds’ of critique and reply, forming a fascinating patchwork of consensus and sometimes heated disagreement. In a spin-off from the original discussion of Griffin’s concept of fascism, a second exchange documented here focuses on the issue of fascist ideology in contemporary Russia.This collection is essential reading for all those who realize the need to provide the term ‘fascism’ with theoretical rigour, analytical precision, and empirical content despite the complex issues it raises, and for any specialist who wants to participate in fascist studies within an international forum of expertise. The book will change the way in which historians and political scientists think about fascism, and make the debate about the threat it poses to infant democracies like Russia more incisive not just for academics, but for politicians, journalists, and the wider public.The contributors: David Baker, Warwick; Jeffrey M. Bale, Monterey; Tamir Bar-On, Toronto; Alexander De Grand, North Carolina; Martin Durham, Wolverhampton; Roger Eatwell, Bath; Peter Fritzsche, Urbana-Champaign; A. James Gregor, Berkeley; Roger Griffin, Oxford Brookes; Siegfried Jäger, Duisburg-Essen; Klaus Holz, Villigst; Aristotle Kallis, Lancaster; Melitta Konopka, Bochum; Walter Laqueur, Washington; Werner Loh, Paderborn; Bärbel Meurer, Osnabrück; Philip Morgan, Hull; Ernst Nolte, Berlin; Kevin Passmore, Cardiff; Stanley G. Payne, Madison; Friedrich Pohlmann, Freiburg; Karin Priester, Münster; Alfred Schobert, Duisburg; Sven Reichardt, Konstanz; David D. Roberts, Georgia; Robert J. Soucy, Oberlin; Mario Sznajder, Jerusalem; Andreas Umland, Kyiv; Leonard Weinberg, Nevada; Jan Weyand, Erlangen-Nürnberg; Wolfgang Wippermann, Berlin.

Fascism Past and Present, West and East

Be the first one to write a review for the book Fascism Past and Present, West and East.

Be Strong Be Happy Live A Happy Life
BALDEV BHATIA