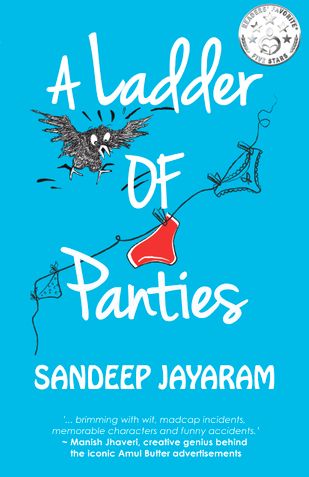 A Ladder Of Panties

Don’t pull down if it don’t pull you up.

That’s just how it goes on the ladder. Girls, chicks, fillies, women, MILFs, cougars; Srinivas Ramachandran will take them all. To get a leg up. Okay, not all. Only the ones with bucks and clout! Mohina Sethi was one of his earliest hit-and-run victims.

Sri has his head full. His is a story that begins with a bathtub on the rooftop, the Goddess of Trifling Matters and a white plastic bag.

Mohina has her hands full. For starters, her tale features a meagre bust-line, a marriage on the bounce and a nineteen-year-old who’s had an abortion. Going out of her mind, Mohina agrees to hear him out.

Twenty days on—in his tale—Sri has landed up at a party… wearing a garland of blue sanitary pads.

Reality stands on its head when a man climbs higher by reaching lower.

Sandeep Jayaram is an author, actor, screenwriter and voice artiste. His debut screenplay has just been commissioned for production. Besides this, he acts in web serials, commercials and feature films. His voice has featured in a string of TV and online commercials. Time permitting, he loves teaching children.

A Ladder Of Panties

Be the first one to write a review for the book A Ladder Of Panties.

The Corridor of Uncertainty
Kiran Chandra