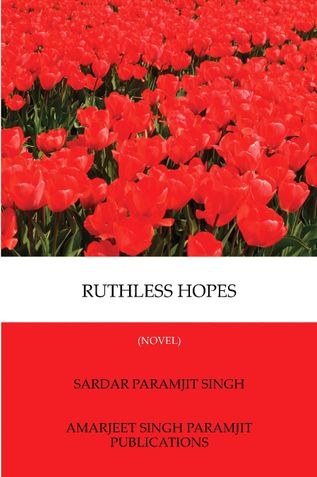 This is a social novel which describes the miserable life of a woman named Preeti, who is married to a man called Lachhman who proves a drunkard and idle person. Her husband, Lachhman does nothing except wasting the whole time in taking wine and loafing in bad company. He does not take care of her and as a result she leads a hell type life. She faces hunger, starvation and so many other economic problems. Due to taking excessive wine her husband dies and their small piece of land is usurped by her brothers-in-law who plan to kill her son but a lady who is a friend of Preeti, helps her in saving the life of her only and beloved son. After that Preeti does not feel safe and secure in her house and she decides to leave her house forever and goes to her paternal house. She lives with her brothers for some time but is separated from them due to hatred of her sisters-in-law. She has to face so many hardships and problems in order to bring up her son and she tries to educate him. Her son gets a job in the city and is killed while working in a machine. Preeti hopes and expects too much but all of her hopes prove ruthless by the sudden and accidental death of her lovely son. When the dead body of her son is brought to her, she does not tolerate it and she gets heart attack immediately and she dies too at the spot. That is the end of the novel.

Sardar Paramjit Singh was born on 01.02.1963 at the village JANDIALI Post Office JAMSHER KHAS in Tehsil and District JALANDHAR, PUNJAB, INDIA. He belongs to Jat Sikh family and his Genealogy is NAHAL. His father S. Gurdev Singh is a farmer and his mother Parkash Kaur was a house-wife.On 4th JULY 1977 he was deeply shocked at the untimely death of his mother who was cremated the next day on 5th of JULY 1977 and that period remained unforgettable throughout his life. That event made his mind miserable and depressed. He began to write poems. He wrote some novels at very young age.
He got married on 21 Nov 1992 with Kuldip Kaur daughter of Late Sardar Chain Singh and Late Sardarni Harbans Kaur residents of village CHITTI, Distt. JALANDHAR. On 17 Feb 1994 daughter Amandeep Kaur was born and on 11 JAN 1998 his son PARAMVIR SINGH was born. In 1993 he established AMARJEET SINGH PARAMJIT PUBLICATIONS.In 1990’s he wrote many articles which were published from time to time in newspapers i.e. Daily Ajit, Akali Patrika, Aj Di Awaaz. He wrote many poems in German which were published from time to time in Kultuergespraech (The Cultural Dialogue) a magazine published by Mahatma Gandhi Memorial College, Udupi, Karnataka.
A highly qualified Sardar Paramjit Singh holds degrees of M.A. (English), M.A. (Punjabi), M.A. (History), B.ED., ZDAF and many more certificates. He has knowledge about English, German, French, Spanish, Arabic, Hindi and Punjabi Languages. A young and pious Scholar and Academician of rare talents, he has written five novels in Punjabi i.e. AZAADI ,MAUT NUN TALASH RAHI ZINDGI ,BEWAFA, ZAALAM UMIDAN, LAADLI DHEE, penned two books of poems in English i.e. WHO TOLD YOU? & HE TOLD ME, two novels RUTHLESS HOPES & FRAILTY and two books of poems in German. He has written many articles in different Languages. Besides these, he has exhibited his religious bent with annotations of many holy verses of Sikhism. Several educational books were translated by him from Hindi and Punjabi to English. Sardar Paramjit Singh had already come a long way at quite young age and he has so many milestones ahead of him. We wish him to achieve many more laurels.

Be the first one to write a review for the book RUTHLESS HOPES.