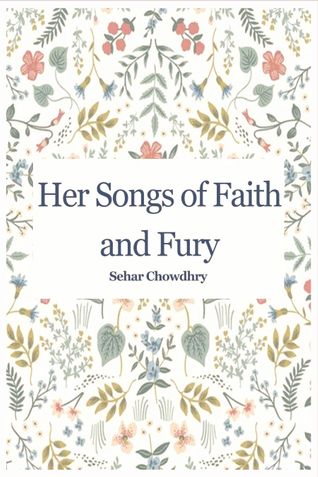 Her Songs of Faith and Fury

Growing is the race against the time that tails you with ungodly perseverance, it places you in the furnace that moulds you to the best of its restricted capabilities. Growing is the soft song of the nearly-grown, playing with fervency, come nights starlit or day broken at dusk. Growing is unusual. Growing is arduous. Growing may be willed to nothingness, but remains a process so human, without it one would be rendered unimpassioned.

Growing in my fragmented world within what previously appeared to be a journal of one, entailed rites of passage that I have so dearly detested.
Her Songs of Faith and Fury are the telling’s that harbor a home of consideration for every woman and the multitude of experiences she hid behind a self constructed wall of courage. They detail a select few of the plethora of challenges that pre-womanhood has posed not only for me, but for the various, incredibly inspiring almost-women I know.

This anthology aims to not project an image but to provide a stop bath of comprehension to process your own adaptation. It endeavors to provide a framework etched within which you find correlation solace, acceptance, fury, empathy and echoes of yourself. If you have been consumed by the foreboding fog of uncertainty, if you have been enveloped by forces of fret that threatened to break the ocean’s might, if you have halted at a crossroads clueless- you have grown and this collection serves to unite those who belong, outside the doings both right and wrong, so we don’t crumple into corners of our selves.

Sehar Chowdhry is a sixteen-year-old student from Gurgaon, she is passionate about creation of all kinds and aims to pursue journalism and art-history for her higher education. Though she is too, an impassioned advocate of justice, parity, fair adjudication, equality and the feminist theory to name a few.

Her main goal with her debut anthology was to portray a glimmer of the ecstatic artistic impulse that she aims to channel within every forthcoming work of hers.

Her Songs of Faith and Fury

Be the first one to write a review for the book Her Songs of Faith and Fury.

Other Books in Poetry, Politics & Society

The beauty in the storm
Alta H Mabin