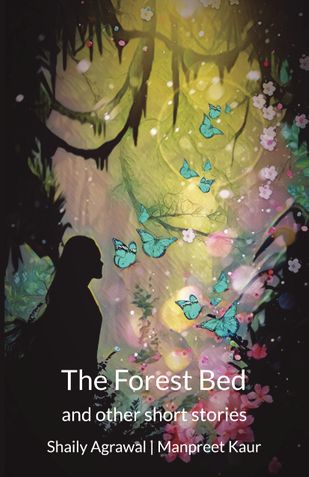 and other short stories

This is the coloured version of the book. You can find the black and white book here: https://store.pothi.com/book/shaily-agrawal-forest-bed-0/

This book is a collection of 30 pieces of flash fiction that explore the very human emotions of characters who may not necesaarily be humans. Most of them begin where stories generally end. They take you down that stream of emotions where you think you'll dip only your toes but end up drowning. They present life with a skewed perspective that incite pain in humour and humour in pain.

All stories carry the wide angle view that comes from living between worlds. As one of the characters had rightly said, “You’ll find out, in time...”

Backing up the story line are the illustrations that create an aura of mystery and intrigue.

Here is a sneak peak into one of the stories from the book.

He hurried up the building stairs taking two steps at a time, excited and nervous at the same time, like a teenager. Opening the door with his gnarled hands, he announced in a breathless voice, “Honey! I’m home.”

Opening the packets, he placed the vegetables, bread and eggs in separate bowls on the kitchen counter, just as she liked it. This way, she wouldn’t have to strain herself by moving them around too much or too far. Then, he set the table complete with the flowers and candles he had bought on the way home for a romantic dinner and stepped in the bath for a quick shower.

He could hear the chink and clatter in the kitchen, and the yearning to be with her tugged at his heart. He quickly dressed up in his best clothes, checked his reflection and rushed into the dining room.

The food was already on the table. He pulled out the chair for his wife of the past 41 years, just like the early days of their marriage. They talked about their day, which was pretty much mundane, but still, somehow, made him realize how much he had missed her all day.
As he munched the food, once again, he thought of the days when she was gone. The house was a mess and so was he. How many days had he gone without washing his face or changing clothes?

How lucky was he to get a second chance!

Savouring every bite, he thanked the stars for the kids who called her back through the Ouija board...

Shaily and Manpreet are best friends for 20 years with a new-age outlook that often conflicts with their traditional Indian upbringing, creating a skewed perspective that is apparent in their stories and illustrations.

Be the first one to write a review for the book The Forest Bed.