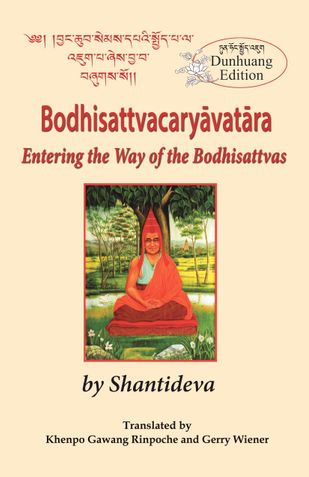 Bodhisattvacaryāvatāra: Entering the Way of the Bodhisattvas (Dunhuang Edition) by Shantideva

The Bodhisattvacaryavatara is the most respected and well know text that teaches how to train the mind of a bodhisattva. This text focuses on bodhicitta, mindfulness, attentiveness and the six paramitas. It is an important and foundational text for anyone interested in training their mind following the Buddhist Mahayana tradition. Chapters one through seven focus on relative bodhicitta while chapter eight focuses on absolute bodhicitta. This book teaches how to live in this world in an ethical and moral way that brings happiness and contentment to both self and others.

The author, Shantideva, was born in the south of India sometime around the early part of the 8th century and became one of the great scholar practitioners of Nalanda University. This first version of the text was translated from Sanskrit into Tibetan in the late 8th century by the great Nyingmapa translator, Kawa Peltsek, together with the Indian pandit, Sarvajnadeva.

Shantideva was born in the south of India sometime around the early part of the 8th century. He was the son of a king, Manjushri Armor, and was given the name Peaceful Armor. Shantideva received a formal education befitting royalty. When he was of age and ready to rule the kingdom, his mother, an emanation of Vajrayogini, advised him to leave and go to Bangladesh for the sake of the dharma. She did not want him to take over his father’s position, as it was too samsaric.

Following his mother’s instructions, Shantideva went to Bangladesh where he met a girl who introduced him to an outstanding teacher. This master had gained the attainment known as the glorious Manjushri Vajra Samadhi. Shantideva relied on this guru for twelve years, receiving instruction, and practicing Manjushri.

After twelve years, his guru directed Shantideva to go to central India. Arriving, he traveled to Nalanda University where he took ordination with the Acharya, Divine Virtue. It was at that time he was given the name Divine Peace (Shantideva). At Nalanda, Shantideva listened to the teachings while always meditating in luminosity. Since other students did not actually see him studying, only eating, sleeping, or going to the toilet, they began calling him Bhusuku which means a person who just eats, sleeps, and defecates.

Bodhisattvacaryāvatāra: Entering the Way of the Bodhisattvas (Dunhuang Edition) by Shantideva

Be the first one to write a review for the book Bodhisattvacaryāvatāra: Entering the Way of the Bodhisattvas (Dunhuang Edition) by Shantideva.