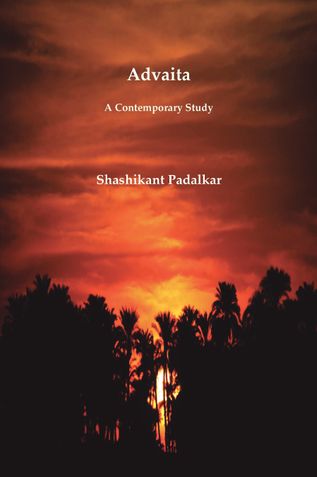 "Advaita: A Contemporary Study" is a companion volume to Author's earlier volume on Vedanta. It can be read as an independent text. As the name suggests, the book is a contemporary study of Advaita's theology based on a 15th century traditional text.

The book starts with answering Anubandha questions and then develops the theology within the framework of Superimposition-Negation. It follows the method of aggregation, and shows as to how one "unmanifested" principle multiplies into various subtle and gross elements and the three worlds of causal, subtle, and gross bodies. Then by dissolution of these three worlds, it traces back to the unmanifested principle to teach the Aupanishad monism at the phenomenal level. Last three chapters undertake the decoding of two great sentences, explain the method of textual analysis, and then follows the classical Yogic path towards Self realization and liberation.

The book takes every opportunity to interpret the traditional line in new light to bring the theology closer to the current state of natural and social sciences. Just to mention few such examples:

(a) Brahman is seen as an inactive semanticizer giving meaning and content to the world objects in the subjective and qualitative experience, (b) Sankhya Tri-Gunas are interpreted as platonic, psychological, and physical aspects of the universe retaining their polysemy, (c) Ishvara and deities are taken as aggregated entities without subjective experience of plurality, (d) subjective free wills are postulated as epiphenomena, (e) Panchikarana (Quintuplication) is interpreted as the separator of measurable and immeasurable worlds. etc.

Appendix-1 and 2 view Advaita from a new perspective of social realities. It does so without doing any violence to Advaita's theology. In fact, Advaita is seen to be eminently suited for the ideas of social and political justice which are prevalent today. In Appendix-1, the book formulates one such line in the Rawlsian framework. The aim here is not to promote any particular institutional theory in the name of theology, but to show that Advaita is not at all bound up with the old hereditary and hierarchical class system or to the heliocentric monarchy. Some of the contemporary socio-political systems are seen to be in better conformance with the Aupanishad spirit of Advaita. The appendixes highlight this reality within the scientific and social paradigms which exist today.

The author took a liking to philosophy quite early when he was an engineering student. His interest in spirituality developed later while he was involved in myriad activities as an automation engineer, designer, manager, and promoter. His first book on Advaita Vedanta grew out of his habit of making notes after reading, and taking long drives in the western ghats. His second book on Advaita however, was planned to offer a more easily accessible introduction to Advaita theology in a traditional framework but with a contemporary reading.

Be the first one to write a review for the book Advaita.

Other Books in Theology