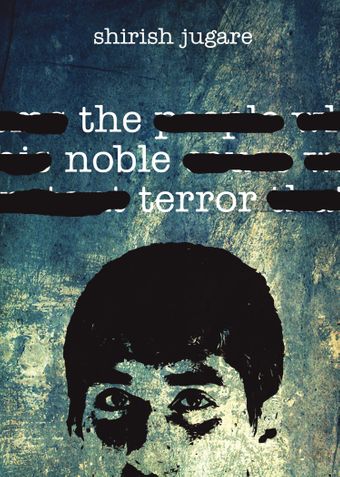 “This is a comic novel of 21st century India, an India where the mobile phone is ubiquitous and where tradition and modernity are locked in conflict, where the conflict between the religious and the secular becomes more pronounced as India launches into a rapid phase of capitalist transformation. The picaresque is quite engrossingly managed, as Om the protagonist negotiates a tricky terrain of Hindu fundamentalism, the comic satire and ironic humour sharp, biting and engaging”
- Dr. Kim Cheng Boey, from University of Newcastle, Australia

Om is a seventeen-year old boy whose family belongs to a Hindu sect. While his father is an atheist, his mother is a strong devotee of Goddess Durga. Surprisingly, however, Om is afraid of Hindu gods and has “converted” to ‘the God of his choice’.

Om along with his parents lives in a bungalow that has occupied only a small portion of a big plot of land. As a result, there is a large open space around the bungalow. One day, a group of people come to the door asking for the large open space. They want it for the celebration of a nine-day Durga festival, which is supposed to start soon.

Om’s parents want to refuse the demand as they think that the nine-day festival would disturb their son’s concentration while studying. Besides, they are afraid that it would become a yearly affair and that in future their house would eventually turn into a Durga temple.

Om and his mother try hard. But, just the day before the first day of the festival, the people grab the house and the open space. Their sudden intrusion terrifies Om and his parents.

Thus, there is a story of Om in ‘The Noble Terror’. At the outset, it appears that it is this story that ‘The Noble Terror’ is all about. But it gradually becomes clear that the story of Om is part of a writer’s novel which is accessed on his computer by a mischievous hacker who recognises the self-censorship the writer has perpetrated on his own work.

Leaving messages within the text of the novel, the hacker forces the writer to confront those things he has censored in his own work and so confront the realities of what it is permissible to say, and not to say, in a contemporary India where Hinduism and traditional spirituality still hold sway over an emerging democratic society.

Shirish Juagre is an Indian writer. He is educated at Macquarie University, Sydney Australia and has done an M.A. in creative writing.

Be the first one to write a review for the book The Noble Terror.

Stories and Poems for Kids
Students of Presidium School

The Art of Flying
Anna Banasiak