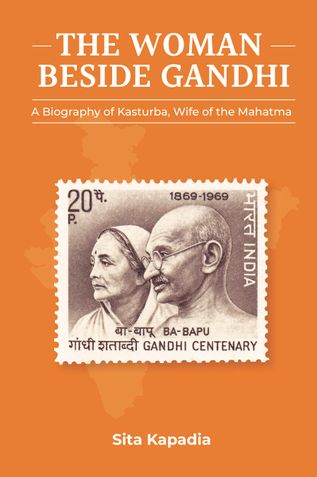 The Woman Beside Gandhi: A Biography of Kasturba, Wife of the Mahatma

The Woman Beside Gandhi is a biography of Kasturba, wife of the Mahatma. Though there are countless references to her in the voluminous works by and about Gandhi, Kasturba remains virtually unknown. And yet it was she who stood up to him, was his teacher in non-violent resistance and the compassionate mainstay of his austerely demanding ashrams. And yet again it was Kasturba, appointed by Gandhi to be the leader of women’s resistance, who by her own example, her speeches and her tireless rounds of towns and villages, motivated women by the thousands to make rapid, radical changes in their restricted personal lives and participate in mass civil disobedience for freedom. Seeing Kasturba go fearlessly to prison in South Africa and several times in India, so inspired and empowered women, that they too went to prison, fighting for their cause. The touching stories of these unknown, unheralded women are here in this book, filling an important vacuum in the world of letters especially as it pertains to women’s emancipation. Three trips to India, meetings with over 200 people who knew Kasturba in person, and a great deal of research through books and places unvisited by other scholars, has gone into the writing of this ground-breaking biography. Sita Kapadia takes the reader with Kasturba, the child bride, and her boy husband from small towns to three continents, through ashrams and prisons. Combining diligent research with engaging interviews in a free-flowing and vibrant narrative, Kapadia shows how bravely and selflessly Kasturba lived her life, unlike anyone else’s in the annals of human history. Gandhian scholar Dennis Dalton calls it a unique and superlative biography.

Sita Kapadia saw Mahatma Gandhi in person when she was nine years old. Seeing her own parents always together, she wanted to know what Gandhi's wife, Kasturba, was like. That childhood wish got lost over the years, only to resurface when she was a professor at The College of Staten Island, City University of New York, where she taught English, World Literature, and Asian Literature. Her increasing interest in spiritual living, women's issues, and non-violent resistance led her to Gandhian studies and reawakened her interest in Kasturba. Then her quest began.

Her teaching career in the USA began in 1971. Before that, she had been a professor in India and Malaysia. In addition to reading several literary papers at universities in India and the USA, Kapadia also presented a paper at an international conference at Harvard University in 1995 on Dowry and Bride Burning in India. Her paper was, "A Tribute to Mahatma Gandhi: His Views on Women and Social Change." Her articles have been published in McGill's Encyclopedia of Literary Criticism, and her poems in anthologies.

She lives in Houston with her husband and is an occasional speaker for the Mahatma Gandhi Library.

The Woman Beside Gandhi: A Biography of Kasturba, Wife of the Mahatma

Be the first one to write a review for the book The Woman Beside Gandhi: A Biography of Kasturba, Wife of the Mahatma.