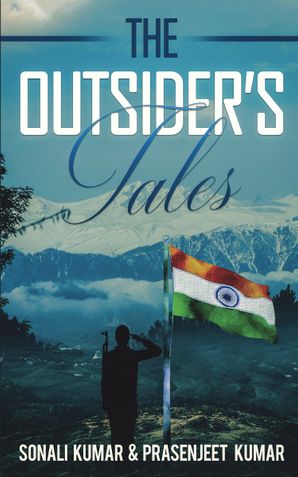 Short stories from the celebrated author of The Outsider’s Curse/Unmasking Kashmir that will tug at your heartstrings and make you think if the insider-outsider government led-distinctions in Kashmir have any human leg to stand on.

When Sonali Kumar, the first lady outsider IAS officer of Jammu and Kashmir, wrote her memoir, she was merely highlighting a curse every All India Service officer has to suffer in J&K.

Little did she then realise that so many other ordinary Indian citizens too suffer from the same curse. Their stories also need retelling. And that is what she has tried to do in the short stories that comprise The Outsider’s Tales.

Ever wondered how does the wife of an IAS officer keep her sanity when her husband goes to the office every day?

Or, the CRPF constable who is ordered to stand guard at places that J&K Police won’t touch with a barge pole?

Or, the barber who has the high and mighty of Kashmir as his clients, but when he needs help his outsider status becomes an albatross around his neck?

The stories are poignant and make you wonder what Kashmiris have really gained by following this old apartheid policy of the Maharaja of Kashmir?

Senior IAS (Indian Administrative Service) officer SONALI KUMAR was the FIRST “outsider” “non-state subject” lady IAS officer to be allotted to J&K cadre with a batch of 1979. She has thus worked in the J&K cadre for 36 and a half years and has spent another year watching events unfold as Arun Kumar, her husband, was still in the IAS there.

During this period, Sonali has held in both Government of India as well as in the Government of Jammu and Kashmir assignments related to industry and commerce (including PSUs), textiles (handlooms & handicrafts), education, welfare, forests and environment, agriculture, horticulture, co-operatives, rural and urban development, health and medical education, anti-drought prone and anti-desert area development programmes, revenue, judicial, and even disaster relief operations.

Her myriad experiences spanning all kinds of sectors have, she believes, equipped her with the powers of ideation, problem-solving, out-of-the-box thinking, and strategic policy insights that only a long stint in IAS probably can endow one with. This is the experience that she thinks she needed to share in the background of this constant national and international focus on the Kashmir Problem.

Prasenjeet Kumar is the author/co-author of over 27 books in four genres: Fiction, motivational books for introverts (the Quiet Phoenix series), books on Self-Publishing (Self-Publishing WITHOUT SPENDING A DIME series) and cookbooks (Cooking In A Jiffy series). His books (53 titles so far) have been translated into French, German, Italian, Japanese, Spanish, and Portuguese, and sell in over 50 countries.

Prasenjeet is the self-taught designer, writer, editor and proud owner of the website cookinginajiffy.com which he has dedicated to his mother. He also runs another website publishwithprasen.com where he shares tips about writing and self-publishing.

Be the first one to write a review for the book The Outsider's Tales.