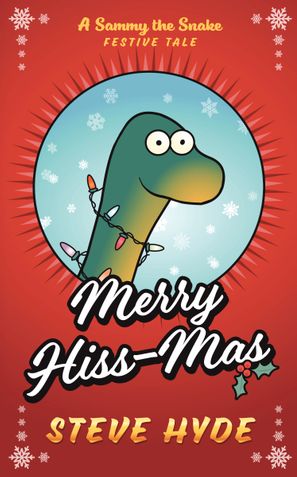 Sammy the Snake loves the snow. All he wants to do at Christmas time is ski, sledge and build snowmen. Unfortunately, it's not easy for a cold-blooded reptile. What will it take to make his Christmas wish come true?

Steve wrote his first children's book when his daughter, 4 years old at the time, requested a story about a witch who didn't like cats. On holiday in the middle of nowhere, unable to simply buy a book that met the criteria, he wrote his own.

6 years later, Steve found himself reading "Frida the Witch" aloud on national television, in the most unlikely of forums - the series semi-finals of Channel 4's long-running game show Countdown. The encouraging words he received from Rachel Riley, Anne Robinson and hundreds of supportive viewers led to him making his first forays into self-publishing. His first ebook, "A is for Aileron", a collection of rhymes inspired by the show, was published on 14th June 2022, the same date that the episode aired. His first illustrated children's book, "Merry Hiss-Mas", was published 5 months later.

Steve will return to the Countdown studio in January 2023 as part of the 16th "Championship of Champions". He intends to turn a combination of writing and game show stardom into a viable career.

Outside of writing, his interests include music, video games and football - he is a long-suffering Notts County supporter. He can be found on YouTube at youtube.com/@SteveHyde-author and on Twitter as @stevenjameshyde

Be the first one to write a review for the book Merry Hiss-Mas.

Pubg:tips to be a pro from a noob
Deepankar paria