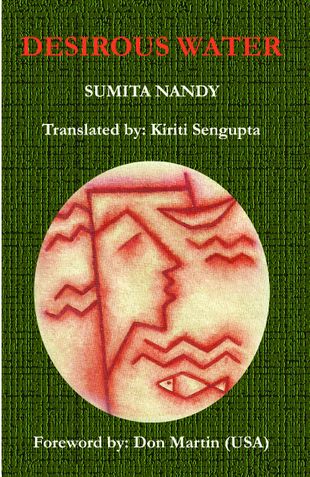 At its very essence Desirous Water is a description of the relationship between the male and female sides of a being, or psyche, as told primarily from the male side. It has elements of love, passion, urge, erotica, and appeal, and fire. There is also an underlying spiritual undercurrent throughout the work, which ties it all together and puts it all in context. The poems stand very well on their own, but to grasp their full meanings you really have to appreciate how they all relate to and reinforce each other. And it doesn’t hurt to read them several times. A note on the translation: Here Dr. Sengupta provides a translation which will be easily appreciated by all readers, regardless of their personal cultural background or faith system. It should still be understood,of course, that this was originally a Bengali work, with all the elements associated with that. But Kiriti translates the work in such a way that, while those elements are still present, they don’t hinder the understanding or enjoyment of the reader in any way. It is a rare talent to be able to balance all those various aspects so finely in translated poetry! So sit back, relax, and enjoy your own Desirous Water!

Sumita Nandy was born on 27th October, 1970, in Khardah, West Bengal, India. She is an award winning Bengali poet, presently residing in Durgapur, West Bengal, India. Sumita has been writing for over a decade and she has now established herself on a firm platform for herself. She has received many awards for her poems. Sumita has three poetry books to her credit, namely, (i) Stabdhatar Gunjan (Humming of Silence) published in December 2005 by Prantar Publication, (ii) Dirgha Galper Shese (At the End of a Long Story) published in October 2011 by Prantar Publication, (iii) Tipshoi, Kharadag (Left Thumb Impression, Scratch) published in April 2013 by Prantar Publication. Sumita has received 'Durgapur Sahitya Samman' from Nikhil Bharat Banga Sahitya Sammelan, Durgapur branch in March 2012 and 'Poet Sikha Samanta Smriti Samman' in April 2013. Apart from writing in Bengali periodicals like Nandan, Kabisammelan, Udbodhon, etc., she has also been a part of many little magazines published from various parts of West Bengal, Tripura, Andaman and Nicobar Islands, Delhi. Sumita’s poem (translated into English) has also been included in The Unheard I, authored by Kiriti Sengupta, a poet, and a bestselling author from Calcutta, India. In recent times four of her poems were published in a literary anthology, Scaling Heights, edited by Gopal Lahiri of Mumbai, India.

Be the first one to write a review for the book DESIROUS WATER.