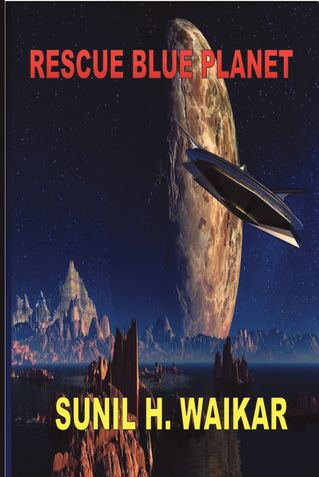 In Search Of The Unknowns

It is a space fiction thriller, that deals with many things which we could not find answers to.
Where the link between the advanced human civilizations from the prehistoric periods and the present civilization was lost? What happened to the developments which the epics depict very boldly?
Why the mysterious objects like the Great Pyramids were built?
Why we always look at the sky while praying to God? Did the Gods disembark from the skies? The Heavens??
Where from the life came to the earth? There are many unanswered questions in our minds. Do we know sufficient things about the Earth as well?
There is so much about the Earth that we undervalue in our daily lives. Though human civilization has spread to every region of the world, our existence still depends on the alignment of natural phenomena that are beyond our control – Earth’s precise distance from the sun, which creates ideal temperatures for life, is a perfect example.

Our planet’s many peculiarities make it both beautiful and habitable, but what would happen if something changed? What if a single, elemental part of our planet was altered, and what would the consequences be for humanity and for all life?

What if, Earth’s magnetic field disappeared? Imagine the Earth exactly as it is, but with no trace of geomagnetism. As it turns out, this seemingly simple, the change would have drastic consequences for humanity and all life on Earth. Some of the resulting effects would be plain weird – others would be utterly catastrophic.

Two young, brilliant scientists from Indian Space Research Organization devotedly search for those answers puzzling the minds of the humans since prehistoric periods. They succeed in developing the techniques for transmitting a message signal faster than light speed. The advanced civilization which they firmly believe to exist, respond them with suitable answers.

An interesting story of the human philosophy, and the spiritual facts about our beliefs, presented in a novel way.

………………. ‘Rescue Blue Planet’ The Novel deals with the most advanced civilization existing at a far away distance from the earth.
They are ages ahead of the humans in science and technology. Their scientific things would also look to be a miracle for the humans.

Truly speaking, humans are their creation. They have developed the human brain as per the requirements of the situations. The pyramids on the earth are also their creations for the storage of energies to be used in the emergency situations. The advanced civilization is far ahead of the humans in science and technology. They had created the atmospheric shield to protect the earth and the humans from the cosmic particle attacks.
A catastrophe is planned to approach the earth by yet another advanced, but ill hearted civilization to capture the earth with the intentions of extermination of the mankind from the earth.

The author unveils the mystery and presents answers to the missing links of the history.

About the Author----Sunil H. Waikar

Sunil Waikar was born in India and graduated as Electrical Engineer in the state of Maharashtra.
He worked with a renowned Electricity Distribution Company and retired in 2013. During his services, he maintained his passion for writing fictions. Sunil is an avid traveler and likes to spend time in the midst of nature.
His Science Fiction, Guardian: Fighting a Digital Conspiracy at Nainital is available on Kindle Direct Publishing in e book form, and Paper back on Createspace.com an Amazon.com company, and Amazon Europe in English as well as in Marathi.

His second space fiction,
“Rescue Blue planet….” is a space fantasy, which presents the reader with the answers to various mysteries about the chances of contacts to the advanced civilization existing in the far off galaxy.

Be the first one to write a review for the book Rescue Blue Planet.