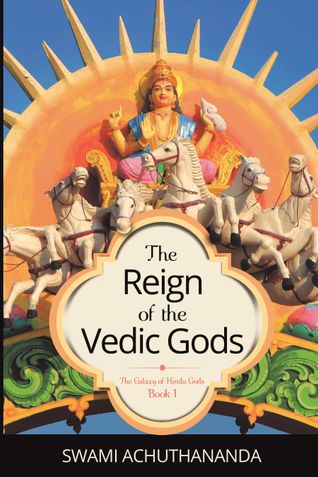 The Reign of the Vedic Gods

The Galaxy of Hindu Gods - Book 1

Hindu mythology is often compared to a bottomless ocean that cannot be navigated. The sheer number of gods and goddesses can be overwhelming. But it need not be that way. As Tagore says, "You cannot cross the sea merely by standing and staring at the waters." Tagore and Gandhi and Vivekananda were merely ordinary people energized by the tales of Indian mythology. In this book, Swami Achuthananda takes you on a journey--without getting wet--to meet with the gods and share their tales with you. These gods shared a peculiar trait: they were imperfect.

Among the swarm of gods, the most ancient are the Vedic gods which include luminaries like Indra, Surya, Varuna, Agni, and others. Today a minor deity, Indra was once the ruler of the three worlds who, under the influence of a mysterious power drink, fought with the demons and vanquished them. His reign did not last long. His comrades Surya and Varuna also had their glory days but were overthrown by other gods of the pantheon. Yet, after thousands of years, gods like Indra, Surya, and Varuna are still household names and honored in Hindu rituals and traditions.

If you know little or nothing about Hindu mythology, this is your ideal starting point where you will meet the overwhelming array of Hindu gods and learn about their wonderful stories.

Having lived more than two decades in India, Swami Achuthananda lives and breathes the culture. He is an exponent of Indian Carnatic music and researches Hindu mythology in his spare time. A born Hindu, Swami loves India passionately but lives outside the country.

When Swami is not discussing Indian mythology, he's seen talking about India's other greatest religion - cricket.

The Reign of the Vedic Gods

Be the first one to write a review for the book The Reign of the Vedic Gods.

Other Books in Religion & Spirituality, Theology

The Conflicts of freedom of expression and religion
Amit Singh