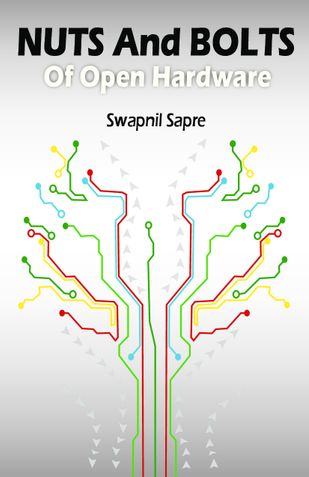 Nuts and Bolts of Open Hardware

This book addresses the issues of evolving a Free or Open Source Software (F/OSS) initiative within the EDA, silicon and semicon-ductor/electronic/embedded industries.

Open source EDA tools-compilers/simulators, methodologies, pro-tocols, ip cores and various other initiatives will be discussed in the book.

The book is not only an awareness session for EDA and Semicon-ductor and an effort to motivate engineers and common people to move from proprietary resources to use open source tools in EDA, but also to inspire them to contribute for such usage and movement.

Efforts have been made to explain in detail the inception of thought of openness in software and content has been taken from open initiative of Wikipedia at various areas and levels.

Though there are many books available on the FOSS initiatives but I realized there is less of compiled and integrated material on Open Hardware and information relevant to hardware side of embedded systems and enthusiast for semiconductor, electronics and silicon.

In a sense, hardware is becoming much more like software, up to the point where you actually fabricate an object," von Hippel says. "That's why you're starting to see open source techniques in hard-ware. Design is largely going to shift out from manufacturers to the communities

Further this book is an effort to make this literature capable to be accepted as text book for engineering students for their quest to understand open side of software as well as hardware, and increase their comfort zone as well as awareness and enthuse them to adopt and accept open hardware with open hearts.

Swapnil Sapre has over a decade of verification and validation experience for System Design, ASIC/SOC and IPs. He has been exposed to various verification and Validation techniques and methodologies like Formal Verification, Assertion Based Verification, Constraint Driven Random based and Coverage Driven Verification, VMM,URM,AVM and OVM i.e. Open Verification Methodology. Swapnil has been providing consultation to various organizations through his expertise in - System Verilog, Verilog, and VHDL ,ASIC-SOC-FPGA,Memory,Peripheral verification and System Validation.
Swapnil has worked on the domains like Serial Interface, Wireless, SoC, Avionics and- Processor. Apart from Chip design aspect -Swapnil also work and consults on System Design -Integration, De-buggers, Tools, Scripts, Oscilloscopes, Software Drivers, Linux, DLLs , Applications and Firmware and ROM development.
Swapnil has received recognition from Respected President Of India for his presentation on “Education-Re engineered”, that was a thought paper presentation to uplift the education curriculum, methodology and process for imparting engineers in country under University systems.

Swapnil provides training and education on Open Source EDA , electronics , semiconductor and embedded systems specific tools , OS specific spins and packages to schools and colleges, and works as catalysts for usage of Open Source tools in the institutes and organizations within country. He is motivated by the thought of spreading the awareness of Open hardware and software in the user and developer community.
His interests lie in everything open source and their applications. When he’s not working on “serious” things, he also likes collaborating and teaching on usage of open source and hardware in Science education and basic learning for kids, develop a product and consulting.
Other than the above mentioned subjects Swapnil writes and thinks about psychology in performance management, astrophysics, metaphysics, string theory, underpinnings of belief systems, mythology, religion, medicines, fashion, oriental sciences and arts ,food recipes, media, advertising, direct marketing, exorcism, politics, society, environment, economy and travel-travel and lots of travel.

Nuts and Bolts of Open Hardware

Be the first one to write a review for the book Nuts and Bolts of Open Hardware.

Other Books in Engineering