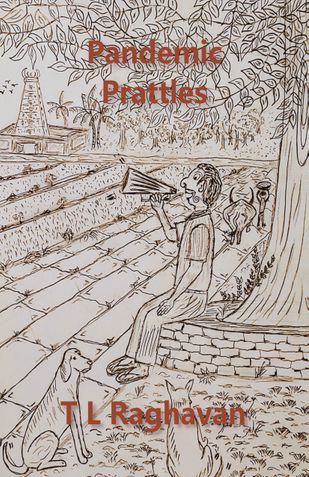 This slim book of thirty odd articles on anything under the sun were penned down during the current pandemic. Some related to contemporary events, some biographical having a bearing on incidents in my fairly long life of eighty five plus years as of now, some laced with imagination to make it sleazily interesting (note the implant of 'imagination' as an escape route lest the reader use "well we caught you ...." in an incriminating way). I don't think you can call it a 'faction' either unless you want to ruffle the feathers of Arthur Hailey!.

Very aptly a friend of mine christened it Pandemic Prattle, which sure will date it while bringing out the caliber of writing invidiously though.

Pushing 86, this book Pandemic Prattles is 7th after Sugarcane And Its Bounty, Sugar- Sweet, Simple..., Humour AND Human Values, With Malice Towards None And Love To All, There Is Romance In Rambling, A Medley Of Meandering Thoughts.

A graduate of Madras University, career wise has been in the sugar industry for well over forty years.

Keen shuttle badminton player and won the Madras State Veterans Trophy. In Rotary he is a Paul Harris Fellow and led a group study to California. He was awarded the Karnataka Shree Puraskar by The Kannada Sahitya Academy.

Blessed with a happy and supportive family comprising wife, son and daughter, daughter in law and two grandchildren.

Settled in Bengaluru for a decade now.

Be the first one to write a review for the book Pandemic Prattles.

Other Books in Humor, Biographies & Memoirs

Price of a Dream
Ena Das