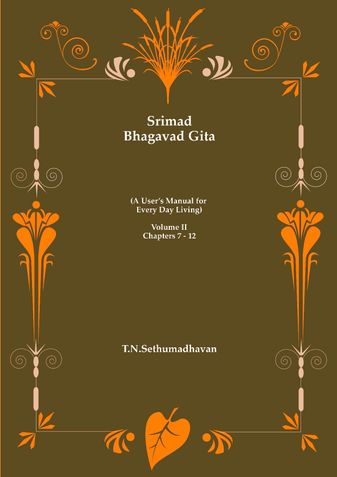 (A User’s Manual for Every Day Living)

ABOUT THE BOOK
Srimad Bhagavad Gita has been a source of inspiration and enlightenment for generations. The message of the Gita is not merely a general spiritual philosophy or ethical doctrine but it has a bearing upon the practical aspects in the application of such principles in our day-to-day lives. It is indeed "A Users' Manual for the Practice of the Art of Right Living".

The Bhagavad Gita was first translated into English by Charles Wilkins in 1785 and published by the British East India Company with an introduction by Lord Warren Hastings, the first British Governor-General of India, in which he prophetically wrote: “The writers of the Indian philosophies will survive when the British Dominion in India shall long have ceased to exist, and when the sources which it yielded of wealth and power are lost to remembrance”. He further wrote “I hesitate not to pronounce the Gita’s performance of great originality, of sublimity of conception, reasoning and diction almost unequalled and a single exception amongst all the known religions of mankind”.

The radiance of such Bhagavad Gita is being presented by the author to the readers of the modern generation covering the subject in an informal style with Sanskrit Text, transliteration, their lucid translation and explanatory notes spread over in three volumes. The author has steered clear off all the scholastic debates and intellectual controversies with a view to reach out to the average modern educated young people who require the strength of the Gita to wade through the current day troubled waters.

The language employed is very plain and down to earth with no frills attached with a view to help the readers at the early stages of their life to understand the essential message of the Gita so that they will blossom into integrated grown-ups full of equanimity of mind, speech and action. Their needs in the context of the present day living styles and habits of study have been kept in view in this process.

ABOUT THE AUTHOR
Sri T.N.Sethumadhavan, a Retired Bank Executive, devoted to the study of Hindu Scriptures and Philosophy, is settled at Nagpur, India. He is a Vedantic seeker by choice and enjoys co-relating ancient Hindu thoughts to modern behavioral sciences and management studies. He is engaged in actively promoting this goal through lectures, writings etc. His extensive writings on the Sanatana Dharma are easy to read and understand, thus being instrumental in enlivening the zeal to learn more about Hinduism in the modern context.

Be the first one to write a review for the book Srimad Bhagavad Gita.