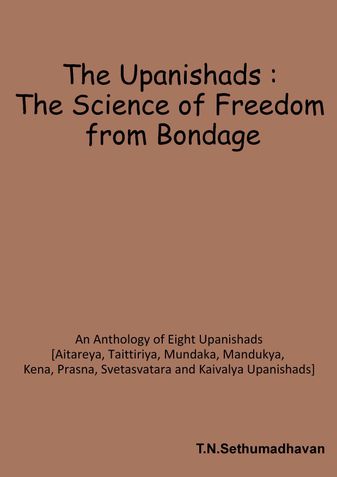 The Upanishads: The Science of Freedom from Bondage

Hinduism is called Sanatana Dharma i.e. eternal religion or way of life based on the teachings of the Vedas prescribing practices of eternal values. The Vedas have four parts - the Samhitas, the Brahmanas, the Aranyakas and the Upanishads. The Upanishads are in the end portion of the Vedas. They are therefore called Vedanta. Vedanta called Prasthanatraya can be compared to a tripod. The first leg of the tripod is the Upanishads or the revealed Truth. The second is the Bhagavad Gita or the practical truth. And the third is the Brahmasutras or the reasoned truth.

The Upanishads are considered apaurusheya, that is, not man-made. This revealed knowledge came from Brahma, the Creator. It has no beginning and no end. This Upanishadic knowledge is always new. It never becomes old because Truth can never become old. The more the Upanishads are read and reflected upon, the more their ennobling thoughts and loftiest ideas are discovered. There is always something new in them, something fresh and something invigorating like the early morning breeze of the spring season.

The Upanishadic mantras are revealed truths based on the experiences of ancient sages, rishis. They embody the gems of infallible transcendental facts which are verifiable.

The goal of all religions is the complete annihilation of bondages, sorrows, miseries and sufferings. Being threatened by miseries all the time, the question arose in human mind ‘Is there any way out from this never-ending chasm?’ The answer is provided by the Upanishads which tell us that to attain Bliss is the goal of human life and the method to reach that goal is to know oneself. Thus the Upanishads teach–atmanam viddhi–know thyself, which is the scientific principle enabling man to become free from human bondage.

There are 108 Upanishads according to the Muktika Upanishad. Sankaracharya raised the status of eleven among them by writing his commentaries and so they became especially important. They are Isa, Kena, Katha, Prasna, Mundaka, Mandukya, Taittiriya, Aitareya, Svetasvatara, Chandogya and Brihadaranyaka. While these are the most important Upanishads and came to be called major ones, the others also have a lot to teach us about the various aspects of Divinity and life. The others are called minor Upanishads. The present study is about eight Upanishads.

The Upanishads: The Science of Freedom from Bondage

Be the first one to write a review for the book The Upanishads: The Science of Freedom from Bondage.