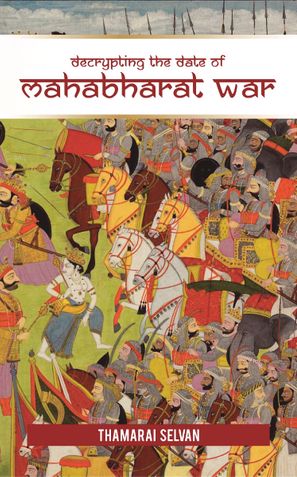 Decrypting the Date of MAHABHARAT WAR

Mahabharat war is an important landmark in ancient Indian history. There is a great epic written by Sage Vyasa about this war and politics behind this. Mahabharat has been touched every Hindu life in some way.

Though several people have an opinion that Mahabharat is just a great story, it has been classified as history in the Indian literature. “Itihasa” means, “So indeed it was” which implies history. Itihasa is primarily a historical narrative with an element of myth in it.

There were several attempts made by various scholars for dating the Mahabharat war. Every one of them though varied the year; they all accept the war started in October month. They never made serious attempt to pin point month and date.

It was a great revelation when I made the chart. Unlike other researchers, I could decode all planetary positions satisfactorily. The planetary positions pointed the Ashada month (July – August). Then I had gone through all the evidences pointing towards the Mārgasirsa Month (October-November). To my wonder I uncovered the mist around them and able to see there were adulterations in the source.

The adulteration varied from changing couple of words, translation errors and interpretation logics. Logical analysis of chronological time line of the events revealed the adulterations.

It would be very hard to compile all the data in a manner a common person could understand it plainly. Therefore, I started putting together all the knowledge needed to understand my research in order to provide a complete research book.

The analysis on the No. of arrow bed days of Bhisma’s is so huge like Bhisma parva in Mahabharat war. The astrological chart analysis is as complex as Dhrona parva. The comet impact analysis is as impactful as Karna’s parva. The analysis of “Tirtha-yatra (Pilgrimage) period of Balarama” is similar to a telling blow of Bhima’s mace on Duryodhana’s thigh in Shalya parva for Mārgasirsa month believers.

When finished up compiling this research, I could see through the logical and perfect matching accounts of astronomical planet motions, comet impacts, logical sequencing and the astrological calculation of Panchanga for Kaliyuga beginning. All this put together are evidences of a science existed thousands of years ago which is still valid. Hence, we could surely say Mahabharat is history told with added mythological interpretations and teachings of Dharma.

Hence proven the Actual Date of Mahabharat war according to Astronomy, Astrology, Logical sequencing of Events, Scientific facts and root cause analysis is April 25th, 3172 B.C.

I had listed 18 Major milestones of Mahabharat war and post war events in next page. Majority of the readers may not able to believe this research. But it is the fact a deep analysis like this never has been done. We carry these Itihasa history with celebrations of festivals for generations.

The research is based on Tamil Astrology, logical sequencing of events, Astronomy and analysing various factors

Thamarai Selvan, is a professional Electronics Engineer having 25+ years of experience in design and development of high-tech communication network products. He has very in-depth knowledge in Astronomy, Astrology, Mahabharat, Logical analysis etc.

He is the believer of “Alternate thinking” and “Multi-dimensional visualization”.

An unimaginable scientific truth in terms of intermesh of time and space is captured in Mahabharata.

The reason every researcher could not come up with fully convincing date is exposed by resolving the astronomical riddle….

Decrypting the Date of MAHABHARAT WAR

Be the first one to write a review for the book Decrypting the Date of MAHABHARAT WAR.