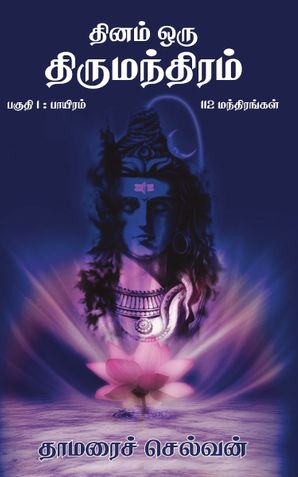 Thirumoolar is a great sage of yore, happened to be a Tamil sage, who had a message from God, as to be passed on to the mankind, without prejudice to whatsoever the time and age it belongs to.

Almighty has a plan, no one knows what it is up to! The Almighty selects certain people, variously in various parts of the world to pass on its message not at variance with one another but strictly in common.

It was Moses says the Bible; it was Mohammed Nabi says Islam; it was Siddhartha, says Buddhism; so on and so forth, each of them chosen to express the great ideals of God's messages with that touch and tone of the nativity that each one belongs to.

Thirumoolar is one among them, chosen in Tamilian race by the Almighty. This has been asserted by Thirumoolar, as is usually done by the apostles, in his own words such as this;

Me, having been begotten by the Almighty so well

To explain Himself in that excelling Thamizh experience so well.

Thirumoolar himself claims the words of God was sent down in 18 languages and all means the same.

This Book goes to in-depth meaning of every verse and explains it to a normal Tamil lay man. It decodes some of universal truths and brings out the exact meaning of the vesrse.

This book is the first part of 10 books. This book is introduction part of Thirumandhiram.

Thamarai Selvan, well known as “Sor Silambar” (Martial Artist of words) is a senior member and advisor of www.tamilmantram.com , an internet Tamil discussion forum. He is well known for his writings in Hindu philosophy, astronomy, astrology, sports, jokes and varieties of poems. He is the believer of “Alternate thinking” and “Multi-dimensional visualization”.

He is currently writing simplified meanings of Thirumandiram verses on a daily basis under the tittle Dhinam our Thirumandhiram. His essays and debates on Ramayana and Mahabharata are priceless and have been praised by Mahabarathan translators. His book "Hindu Thirumana : Sadangukalum, Thaththuvangalum" is well praised one for his beautiful narration of Hindu Married life.

Be the first one to write a review for the book Dhinam Oru Thirumanthiram.

THE EYE OF THE UNIVERSE
DEVESAN