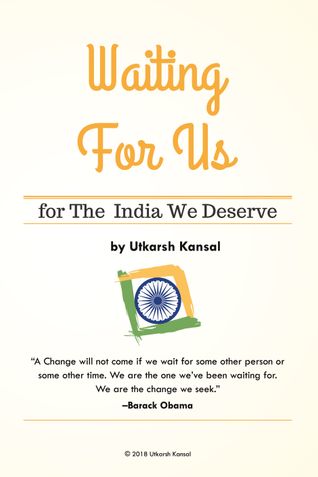 For the India We Deserve

This book ships within India only.
Also Available As
Price: ₹999 + shipping
Due to enhanced Covid-19 safety measures, the current processing time is 5-7 business days.

India was never a country until Mughals and later the British united it and ruled it as one country. Indian states were run by dictatorships, where the majority of the population was poor and ruled by ruthless rulers. Even though there was a huge diversity of language, customs, food, and even gods, all these people did not want to go back to any kind of dictatorship of the last 2,000 years. They all came together to build a just, democratic and prosperous country. Today, that hypothesis is challenged. Unrest in Kashmir, extreme poverty in eastern states, high unemployment and poverty across the majority of India’s population, and increasing crime, makes for a perfect storm for its people and states to go on their own way.

Waiting For Us raises an alarm that if the problems are not fixed at the fundamental level, India, as we know today may not exist as a country in the next twenty-five years.

Waiting For Us analyzes how all of India’s problems are inter-related and can only be solved by implementing a large policy framework. Waiting For Us lays out such a policy framework, and recommends certain key reforms. India needs changes at all levels, including constitutional changes like limiting terms of elected and nominated politicians, removing non-confidence motions and other major changes to the Indian constitution, smaller and transparent government acting as a referee and allowing the private sector to lead industry. Waiting For Us discusses how the government’s main focus should be to implement reforms across all aspects of industry, education, environment, law and order, and national security, which impact daily lives of all Indian people. It also identifies common sense solutions already deployed around the world to similar problems to improve the day-to-day life of millions of people living in India.

Utkarsh Kansal grew up in the heartland of India and believes in a great future for India.

Be the first one to write a review for the book Waiting For Us.

Between the Twilights: Being studies of India women ...
Cornelia Sorabji

My Journey Through The West (Autobiography)
Wael El-Manzalawy