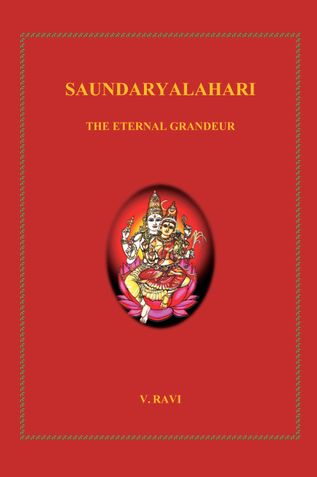 Adi Shamkaracharya, adored as Acharya hails from the Guru lineage of Shri Dakshinamurti, who is an incarnation of Lord Shiva. Acharya, who is considered as an incarnation of Shiva, had all the qualities of Shiva as well as Shakti. He was in the state of Saccidananda and at the same time, he has authored many works and one of them being Saundaryalahari. Majority of his works are related to imparting Advaita philosophy. We know that Shakti is the Power of Shiva, who always remains silent and meditating. At the same time, He is aware of everything that happens in the universe, through His kinetic power known as Shakti, who is full of knowledge and wisdom. Shiva and Shakti always remain inseparable. Saundaryalahari begins by emphasizing the union of Shiva and Shakti.

Apart from the fact that Saundaryalahari was authored by Shankaracharya, there are certain other versions about its origin. Once Shankaracharya had darshan of Parvati and Parameshvara. During the darshan, Parvati handed over to him, a bunch of palm leaves containing all the verses of Saundaryalahari. There is another version which says that it has been composed by Vac Devi-s, authors of Lalita Sahasranama. Third version says that these verses were composed by Shiva Himself as an encomium of His Consort Parvati.

There is another version about its origin. Shamkaracharya went to Kailasa, the Abode of Parvati and Parameshvara. At that time, Shiva gave him five Linga-s and Parvati gave him manuscripts in the form of palm leaves. Shiva’s vahana Nandikeshvara was witnessing this and thought that some treasures of Kailasa were going out of Kailasa. In the fit of anger, he pulled the palm leaves. But Shankara managed to hold on to some portions of it, though he had lost some, due to Nandikeshvara’s anger. He returned only with first 41 verses and the rest 59 verses were taken away by Nandikeshvara.

The first 41 verses belong to mantra Shastra and Kundalini yoga, the subtlest form of Parvati. Being an incarnation of Shiva, He composed the remaining 59 verses on his own, describing Her, from Her head to Her feet. For Gods, description begins from feet to head and for Goddesses, it is from head to feet, which is known as keshadi padantam. Saundaryalahari is based on this principle. Original part containing 41 verses is termed as Anandalahari and the part composed by Shankara, containing 59 verses, is termed as Saundaryalahari and all the 100 verses put together is also known as Saundaryalahari.

Parashakti is worshiped either through mantras such as Pancadashi or through great poetic compositions like Lalita Sahasranama. But, Saundaryalahari is the combination of both and hence is considered as crest jewel of all Her worship. While studying Saundaryalahari, we should always remember that the entire work is that of Shiva, conveying both gross and subtle interpretations.

Every effort is taken to interpret these verses in simple language and with these few words, this book is placed at Her Lotus feet to bless us with purushartha, the fourfold values of human life - dharma (righteousness or virtues), artha (wish or purpose), kama (desires and pleasures) and moksha (the liberation).

Be the first one to write a review for the book Saundaryalahari.