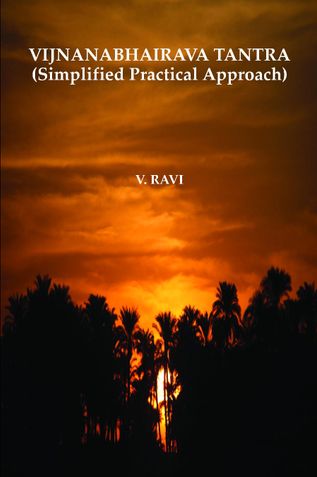 Vijnanabhairava is a Trika and tantra Scripture, wherein Shiva teaches His Consort Shakti, one hundred and twelve methods of contemplations to realize Him. As far as Trika Philosophy is concerned, it uses many complicated Sanskrit words and unless one understands the meaning of technical Sanskrit words in detail, it could be difficult to understand the full glory of this great Scripture. A sincere attempt has been made in this book to avoid all complicated words and make the teachings of Shiva as simple as possible. The main idea of this book is to discuss about one hundred and twelve contemplations in very simple terms, without loosing sight on the focus of this sacred Scripture. All these contemplations can be easily practiced at home.

The entire text is in the form of divine conversation between Shiva and Shakti. Shakti asks Her Lord Shiva and gets clarifications on some of Her doubts and that is how this ancient Scripture has come into existence. The text has one hundred and sixty three aphorisms. Mind is the only factor in God realization. When a practitioner is able to dissolve his mind into the supreme consciousness of Bhairava, he becomes Bhairava himself. Tantra is based on the principle of accepting one as himself. In yoga one has to dissolve himself into That. The aim of both tantra and yoga are the same, realising the Self within, but the path taken by both are different. For practicing tantra, one need not have extensive knowledge. Understanding certain technical terms are necessary to achieve rapid progress. In yoga one has to fight against the principles of nature but in tantra one continues to remain with the nature. However, practice is important in both.

As far as possible, Sanskrit alphabets have been avoided and are used only in a very few places. However, IAST (International Alphabet for Sanskrit Transliteration) format is used through out the book, so that original glory of Sanskrit pronunciation is not lost. The basic idea of the book is to explain the teachings of Shiva in simplest terms possible and the book does not dwell at length about Trika Philosophy.

This book is authored by V.Ravi. He shares his spiritual experience through detailed discussions on Self-realization, interpretation of Indian Scriptures, simplified guidance to kundalini meditation, explanation on mantras, etc. From the year 2000, he has devoted his entire time to writing. He has spent considerable time in studying Indian scriptures, particularly Advaita philosophy, which is the foundational aspect of Indian philosophy. He uses simple language to explain Sanskrit words, which become an integral part while understanding sacred Indian Scriptures. He owns a website manblunder.com
His other books are Lalitā Sahasranāma, Śiva Sūtras, Kundalini Unravelled, Essence of Bhagavad Gita, Emancipate Your Soul and Tattvabodha. He has also published a spiritual novel Will You Comeback Guruji.

Be the first one to write a review for the book VIJNANABHAIRAVA TANTRA.