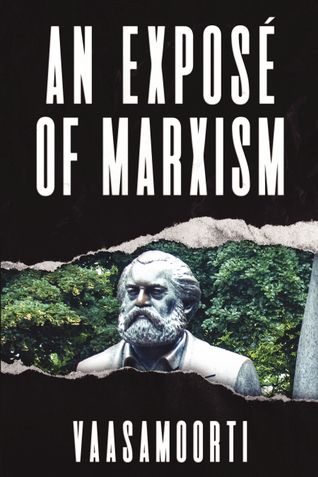 An Exposé of Marxism

An Exposé of Marxism challenges long-held assumptions and conclusions about Marx's theory and probes its tenants in depth.

Professor Vaasamoorti analyzes the fallacies of Marxism as an economic doctrine. He examines and challenges Marxism as a political theory in all its different flavors.

Inside the pages of this book we will explore:

Whether you are a scholar interested in investigating or refuting Marxism or you're just curious about how Marxism took over half the world, you'll find this book both engaging and informative.

Vaasamoorti, Varanasi Satyanarayana Murthy, has written ten novels, several short stories, general books and books for children, two of which were translated into other languages including Russian.

Vaasamoorti was born in a village on the banks of river Godavari. He had to discontinue his college studies due to a long crippling bone disease. After passing Hindi examinations he started his career as a Hindi teacher in a high school in Amalapuram, in Andhra Pradesh. Still later he appeared privately for Intermediate, BA in Economics, MA in English Language and Literature. In 1966, he joined the Department of English in S.K.B.R. college in Amalapuram, where he retired and continued to work on his books, novels and articles.

He started his literary career with an article in English, An Artificial Language in My India, a weekly from Bengaluru. His English works are Here and Beyond, a novel, The Language Revolution, dealing with the language situation in India, Marxism, Relevance and Practice, a critique of Marxism, Goodness and Good Manners and Thinking the Right Way.

He has wide-ranging interests. He started a film society and a science forum besides attending to his activities. He was associated with the consumer protection movement for some time and has been a keen lover of animals and the environment. He served as Editorial Assistant for an illustrated weekly for 11 years.

An Exposé of Marxism

Be the first one to write a review for the book An Exposé of Marxism.