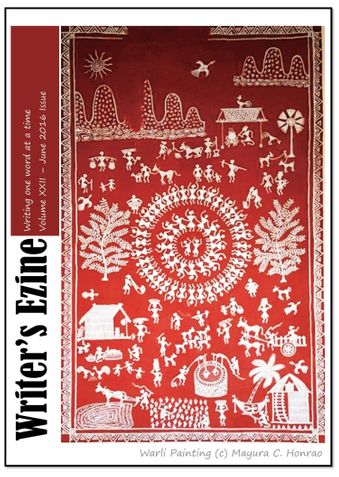 Writer's Ezine was started as a monthly literary online magazine (E-zine) with the intention of providing platform to emerging as well as established writers from around the world. From June 2016 Writer's Ezine would be published Quarterly.

The idea of creating a platform for writers occurred to Arti Honrao towards the end of 2013. As a writer, she had been a part of many online forums, magazines etc. and she wanted to play a role in making a difference in the literary world.
She thought of various names for the domain and finally settled on Writer’s Ezine. She purchased the domain and then discussed this with Namrata; her online friend, who then, after a thought agreed that it was a good initiative.
Right from day one responsibilites were sorted out; Namrata was meant to handle the promotions and editing/compilation of the submissions, handle review and interview section while Arti worked on the site, banners and badges, publishing the posts on site – the designing, forms etc., creating issuu e-magazine and pdf versions of the issue.

Having published more than 100 contributors in the first five issues; WE released its first special edition issue in September that featured contributors already published on Writer's Ezine. The journey continued and WE released it's second special edition (Anniversary Issue) in April 2015.
As the journey progressed WE introduced new features including Book Giveaways and it was during one of such book giveaways that Namrata was recruited by a Publishing House to be their Editor, which had a negative impact on her role in Writer's Ezine and finally the decision had to be made.
Namrata was no longer a part of Writer's Ezine and Arti Honrao single-handedly released November and December 2015 issues.

Arti Honrao announced that December 2015 issue would be the last issue of Writer's Ezine. The story behind the decision can be read on this page: Why was the magazine closed to begin with.
Statistics as on 2nd December 2016: 21 Issues, 69,265 page views, 536 posts, 275+ contributors, 1,595 Facebook followers, 173 Twitter Followers and 82 Newsletter subscribers.

“Sometimes you wake up. Sometimes the fall kills you. And sometimes, when you fall, you fly.”
― Neil Gaiman

April 2016 was supposed to be the second anniversary of Writer's Ezine but, unfortunately there was no celebration. This and a few other factors led Arti Honrao to reconsider her decision of closing down Writer's Ezine and finally towards the end of the Anniversary month; she announced the re-opening of the magazine.

The magazine will now be published quarterly.

WE appreciates submissions in all forms of poetry - prose poems, haiku, tanka, acrostic, etc., fiction - including 55-fiction & flash fiction, non-fiction, photography and (newly introduced) art in any form. Anything that is creative is accepted at Writer's Ezine. e.g. paintings, quilling, sketches etc. (You can send photos of the same with the description of the art)

To get published in our magazine you can send in your work in any of the above mentioned categories (only English) as per our submission guidelines mentioned on our website.

Be the first one to write a review for the book Writer's Ezine June 2016 Issue.