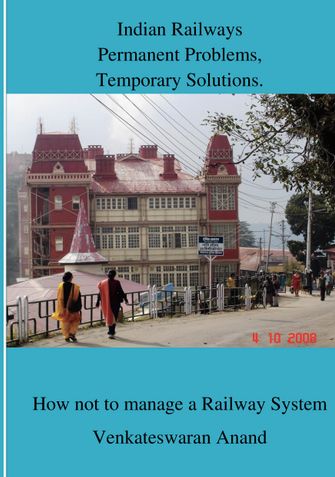 How not to manage a Railway System

Venkateswaran Anand is a Science Graduate of the Panjab University, Chandigarh.He had his early schooling in St.Edwards School,Shimla and completed his graduation at the SDB College.He joined the Indian Railways as an Officer-Apprentice in the Mechanical Department.During the course of his apprenticeship he passed the examinations of the Institution of Mechanical Engineers and Institution of Production Engineers, London.He is a Fellow of the Institution of Engineers, India and a Member of the AIMA (All India Management Association). In his forty one year career,he worked in the Central, Eastern,Southern,South Eastern and Western Railways,besides the Integral Coach Factory,Research Designs and Standards Organisation and Diesel Locomotive Works.He was the first Chief Mechanical Engineer of the Konkan Railway Corporation.During his service he was posted to Chennai,Lucknow,Bhusaval(Maharashtra),Katni (Madhya Pradesh),Navin Mumbai,Varanasi,Bhavnagar(Gujarat) and Kolkata. He has travelled to Canada, Germany, Switzerland, the United Kingdom and USA. He retired as the General Manager, Southern Railway.Post retirement, he served as Advisor to the Delhi Metro Railway Corporation.As a consultant to the Asian Development Bank, Manila, he assisted in preparing a Report on Railway Reforms for the Ministry of Railways, Peoples Republic of China. His articles have been published in the Hindu,Indian Express,Times on Wheels and Rajasthan Patrika.He has published three books on Amazon Kindle namely, “Close Encounters on Parallel Lines”,“Indian Railways-Permanent Problems,Temporary Solutions” and “Mentors,Tormentors and Dementors”

Be the first one to write a review for the book Indian Railways:Permanent Problems,Temporary Solutions.

The ECG of Entrepreneurship
Bharat Jethani