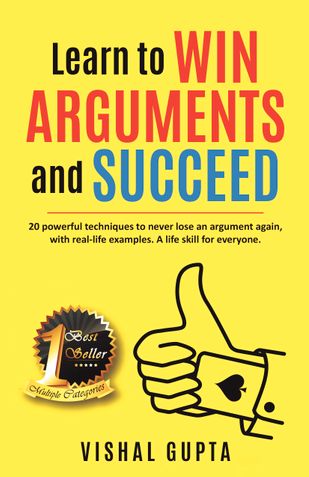 Learn to Win Arguments and Succeed

20 Powerful Techniques to Never Lose an Argument again, with Real-Life Examples. A life Skill for everyone.

Vishal Gupta is a multifaceted person. Besides being a computer engineer and a criminal side lawyer, he follows his passions of photography, astrology, alternate healing therapies, and writing. Vishal Gupta’s zeal to revolutionize his life and that of others, with his Newtonian ideas, has always motivated him to create change with every endeavor he has chosen to be a part of. Spiritually inclined from a very young age and with specific life experiences along his path, Vishal learned the immense powers of Gratitude and Giving, which played a large role in making him write books on Happiness, Health, and Life skills. Having tremendous faith in the goodness of love, life, and people in general, Vishal truly lives and acts with the conviction that ‘Service to mankind is Service to God.’

Learn to Win Arguments and Succeed

Be the first one to write a review for the book Learn to Win Arguments and Succeed.

Other Books in Self-Improvement, Law

The Rules of Being Highly Productive
Deepak Gupta

HOW TO WIN 12 LIFE WINNING GENETIC RELATIONSHIPS ...
B RAMBAR