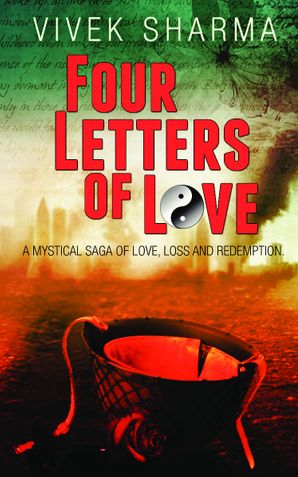 A mystical saga of love, loss and redemption

The subject of coping with the loss of a loved one mostly deals with the perspective of the “One” who is left behind, poignantly reminiscing about things done or not done, love shared or not shared and most importantly- WORDS said or Not Said , when there was a still a chance to say them- when it could have made all the difference.

As Words, whether spoken mellifluously or conveyed silently, shape the world we live in. Giving us the power to celebrate or cope, express or suppress- whatever we choose to do with them.

But what about the choices of the “One” whose loss the one who is left behind wants to cope up with, because the One who departs is the One whose innings comes to an end, snatching away his or her chance to Live, Do, Experience Affect, Express and most importantly SAY what remains unfulfilled or unexpressed at the time of the ultimate journey.

And considering Life & Death to be two Absolute, Undisputed and Certain points in a man's journey, shouldn't the paradigm of coping and expressing be as much for the one who departs as it is for the one who remains behind in this world.

Is there a way for the departing soul to take a leap of faith and use the power of Words one last time to bridge those gaps which sometimes gnaw at his or her soul in those final moments. Can (s)he take recourse to the power of Words to revel one last time in profundity of love and happiness in the last phase of life and leave behind this revelry as a legacy for the loved ones.

Something which obviates the need of coping to some extent notwithstanding the catharsis of grieving! Seeding Hope and Love in the life of the one who is left behind.

Can Words play a role here!

FOUR LETTERS OF LOVE is one such story which delves into this magical world of Words! It tries to explore certain questions. Such as:

What happens when a man's innocuous longing to live happily with his family is out-dared by a dark premonition, making him believe his ultimate journey is looming ahead. Is there anything he can do in those moments to let his two month old child know, how much his father loved him? Something which could actually make the child see the world of his or her father ?

What happens when a daughter having an extremely difficult relationship with her mother, because of scars from her childhood, finds herself standing on the doors of motherhood and is swept in a vortex of emotions, all of which cajole her to reach out to her mom. Something which she hasn't done since ages. Is there a way for her to cross those burnt bridges? And is it really that simple, or that easy, in the life we live, to reach out?

Can there be a friendship through which providence can manifest itself in the darkest hours?

And can love be the source of courage for a family making it fathom the deepest and darkest abyss life can comes across? Is there a way to triumph over the forces which seek out to destroy the fabric of hope? Is there a way to gift our life legacy to the ones we love the most, despite the odds?

This is a story where four lives intersect on the canvas of four letters written across a span of 22 years. A powerful and touching story which portrays the power of a family, the power of love, to seek happiness in the belly of darkness, to snatch hope from the jaws of despair.

All this and more using the Power of Words, when there is still time to use them!

The inspiration came from some real life events which took place in recent times.

An inspiring and heart-warming narrative which is bound to change the way we look at life and our intrinsic ability to face anything.

The inheritance of loss under no circumstances should be bereft of hope!

Vivek Sharma was born in the beautiful pink city of India- Jaipur, to such loving parents that at fifteen he lost his heart, which is still missing and he is not bothered. He studied Engineering before majoring in Business Administration from an IIM at the city of joy, Kolkata. He worked in various organizations across the globe before settling down at the millennium city- Gurgaon, with his childhood sweetheart (the heart thief and now a practicing doctor), his recently teenaged daughter (his mentor), his best buddy- his dad, his mother to whom he owes most of the things in his life and his bundle of joy- Bruno the beagle.

He wrote his first poem at age five, his first play at age seven and many short pieces after that but it never occurred to him to get published.

His father's demise two years back was an epoch in his life which took him on a journey to find answers to certain questions. Four Letters of Love came out of him while he was working on something else, detailing his experiences of finding, loosing and (fingers crossed) finding it again. He believes this story came out earlier as it needed to be told earlier.

Four letters of Love is his first book.

Details about his venture Conversations and More are available at http://conversationsandmore.com.

An amazing piece of writing by an author making his debut. It reaches domains which are hard to reach with such totality that you feel touched and shaken from deep inside.I don't remember reading something like this before which has inspired, motivated and endorsed certain things in life.

The story is told through four letters written by people connected to each other The first one from a soldier in a war zone to his beloved really touches you to the core. The second one from a daughter to her mother delves into an extremely difficult relationship and is a masterpiece in terms of identifying with the emotions and the sensitivity in dealing with something so difficult to deal with. By the time I finished reading the third and the fourth letters( am not telling anything here because it might become a spoiler), I was completely numb, something which I am not accustomed to. Overwhelming in terms of dealing with the emotion of love. Will make you sad but eventually will make you very happy by the time you finish reading it. Truly creative in terms of the narrative

A must read and highly recommended..

Beauty Should Be Banned!
Amit Roop