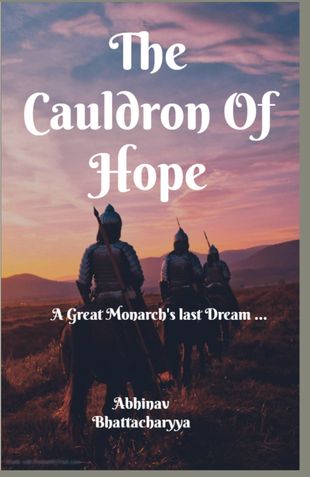 The Cauldron Of Hope

"The Cauldron of Hope’s premise is based on the age-old concept of Hope and Alexander III of Macedon's vision for continuation of governance across the lands, far and beyond after his days in the world is over. It’s hope which drives him at the end to declare the final words at his last breath; the same “hope” which we still in the new millennia follow to shape our futures, our tomorrows.

Alexander, a true conqueror worthy of the title Great, lies on his deathbed; a stark dream suffices wherein he is being told about his exploits by a saintly druid. A dreamy narration of Alexander’s alter-ego, and the characters - a benevolent King, a fierce Captain, and a wily Criminal.

The King starts off on a tangent of lusty indulgences, neglecting his court and kin. The Captain airs his grievances regarding the casual treatment meted out to him by the king. The Criminal seeks profit, as would any other in his stead, but has a Robin-Hood-esque personality.

The story begins in his homeland, the Near Lands (Constantinople - Present-day Istanbul). The subjects & the nobles have no hope of their frivolous ruler - a completely indulgent wastrel.

The Kingdom's treasury is well fed by the Captain of the High Seas, but it's drained through internally by the cunning ministers who have full control of the affairs of the state & the treasury.

The Captain (a personification of Admiral Nearchus – Alexander’s close friend and naval aide) is a valiant soul who is known far and wide through the High Seas (Present-day - The Black Sea). His exploits are magnanimous and also his reputation precedes his self.

The Criminal (a personification of King Porus - Whom Alexander, while retiring from the Hindukush, had made governor of the regions beyond the Caspian Sea), is an orphan without much to uphold but strives every day in the chaotic and corrupt land, stealing for his survival. But, gradually his appetite for glory and industry increases his endeavour and takes on the zenith of the predominant yet masterful art of stealth and strategy."

"Born amidst the unblemished landscape of Assam, Abhinav Bhattacaryya, an IT professional by
choice, delivers The Cauldron of Hope - a book that revolves around a past almost
forgotten, yet emphasizing its significance in the modern world - the Alexander
period. Abhinav, for whom writing comes naturally, brings out the not-so-obvious
elements of Alexander's later life through a historical essence. While most of the
fragments connect to draw out a fictitious representation of an era, the book takes
the reader through an undulating journey of glory, infamy, family and victory.

The Cauldron of Hope is his first attempt at historical fiction. Abhinav studied
engineering at Cyprus International University - Nicosia, a place entwined in thick
Greek and Ottoman-Turkish history. In his professional career, he has worked for
Consulting Majors like Accenture, before joining Royal Dutch Shell, as a Strategy
Consultant.

Presently he is the Founder of – Generic Exchange (An Ardent Provider of
Management Consulting, App Development and Technology
Strategy)

Abhinav resides with his wife in South India. If he's not busy writing, Watching
Liverpool FC games, ideating or gaming, he enjoys cooking or at least tries to pretend he does. "

The Cauldron Of Hope

Be the first one to write a review for the book The Cauldron Of Hope.