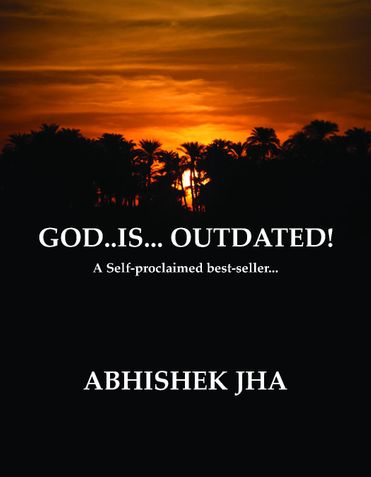 In this work, author Abhishek Jha pens an intriguing spiritual work that combines elements of an "Anyman" biography by showing the evolution and eventual dissolution of faith. This work is designed to provoke thought in the reader as it questions God's relevance in the world. This work begins with how religious beliefs are imparted to young children. As a youngster, God is shown to be a force that has complete control of life and circumstances. The only thing required is total faith and one should surrender everything to Him. When people are bad, then He is angry and exacts revenge. When people are good, He showers them with benefits. It is only when man gets older that the teachings are questioned. For instance, one may ask for something and not receive it. By checking how one asked and reviewing worship techniques, the man changes how he asks to see if it will make a difference. Alas, he is disappointed when he does not get it. Jha continues in this vein in his chapter "When God Chokes!" eventually leading up to his premise that God is outdated. The author then says that man is responsible for himself and his actions. Because of this self-reliance as evidenced by the numerous inventions that resulted from man's efforts rather than God's, the notion of worshipping God is outdated. Author Abhishek Jha's work takes a different approach to spiritual beliefs. Because of the controversial nature of his writing, this work may appeal to both believers and nonbelievers!

Abhishek Jha, in his own words, is a mysterious creature who thinks he's 'Everything' yet ' nothing' !

Born in an esteemed Sanskrit scholar family,the lad was hailed by everyone as a child prodigy .But the boy himself(with full respect to his academics)got drifted to the 'self-searching' higher planes of life enjoying his first spiritual climax,as he claims, only at the age of 12! By the time he was in the eighth standard, he had finished reading the famous Vedas and Gitas(kathopanishad being his personal favourite) and found them fantastic. He then turned to the philander Osho and found his preaching equally good. Nevertheless he finds Vedanta philosophy very close to his life-mission and Vivekananda's words the song of his soul..

Having said all these, he is still a 'normal' guy-next-door in every sense,with an arrogant desire to be the second Leonardo da Vinci! While he has been a good student throughout his academic life, it is the 'Sports' which brings all his adrenaline to one place. He has won numerous prizes in different sports throughout his school days. Again he has done dramas and stage performances a lot and thinks 'acting' comes naturally to him. He is a good singer and has a diploma degree in Vocal classical music. He can't live a day without his Harmonium,he says. Finally, he is a 1st Dan Black-Belt holder in karate,getting black-belt at the age of 15. If that wasn't all, he did 'modelling' in his first year of college life,again a strange combination,just because he could enjoy the glamour without being 'attached' to it. The current book was written by him when he was working in IIM-Ahmedabad for his computer project.Mr. Jha is currently working as a Software Engineer in Bangalore.

What makes him a self-proclaimed brand is his strange reply that he's a 'unique' combination of 3 things: Cute looks, which draws everyone's attention; a startling range of diverse All-round talents; and finally a big empathetic heart which is why people love him!

Shri Ramakrishnarpanamastu... (Offering to the Almighty)

i wont say any thing more about the book as already much has been said before me. i just want to tell you about the author who happens to be a good friend of mine. well i never thought he will write a book but well he did so cheers. and the topic he has chosen has been one of his favorites since boyhood so you can read the book without doubting its contents legitimacy. hope the book does well.

I must say it one of the best investments I've made. Your writing style is superb!!! I wish i could meet the guy who could have such great insights at such young age. Are we seeing a Deepak Chopra or Paolo Coelho in making

I really don't know who this young writer is,but sooner or later he is set to become a big name..I am left spellbound by his masterpiece, and mark my words, the world is going to be crazy after him one day.I would like to meet him as a person,before he gets his massive fan-following running!

Patriotism Without a Country, We are Nothing
Ramakant Dash