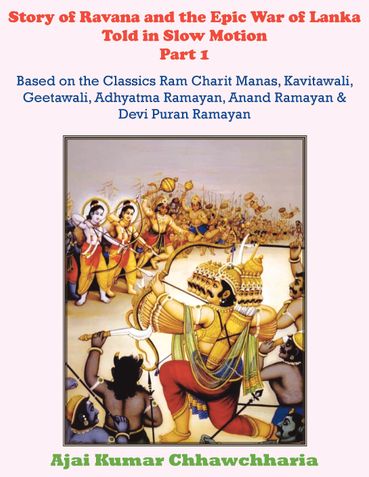 This Book, titled ‘Story of Ravana and the Epic War of Lanka’, is a most fascinating and wondrous Story of the life and time of Ravana, the legendary King of Lanka, and the Epic War that he fought with Lord Ram, a manifestation of the Supreme Being and the King of Ayodhya, a Story that is made famous in the ancient classic known as the ‘Ramayana’, a venerated book that has been adapted by different cultures, and translated into many languages of the world.
Ravana’s importance cannot be overlooked or underestimated, as without him there would have been no story of the great classic the world knows by the name of ‘Ramayana’. The greatness of Ravana’s Soul and the power of his Spirit can be gauged from the very fact that he obliged the Supreme Being to descend from heaven and assume a human form as Lord Ram in order to grant deliverance, emancipation and salvation to him by slaying his gross body of a demon, thereby liberating his Soul from its bondage. Not only that, the Lord had to spend 14 years in the forest like an ordinary hermit, and then walk right up to Ravana’s very doorstep in Lanka for this grand purpose.
In this detailed Book we read elaborately the full Story of Ravana, quoting original Texts, exhaustively and comprehensively, from authentic versions of the Ramayana, such as Adhyatma Ramayan, Anand Ramayan, Ram Charit Manas, Geetawali Ramayan, Kavitawali Ramayan, and Devi Puran Ramayan, an approach that gives the reader a panoramic as well as a kaleidoscopic view of the story, and helps in understanding the subject matter from different angles.
Our Book focuses on Ravana, the chief character opposite Lord Ram in the Ramayana, and covers his life from beginning to end, starting from the events in his previous life when a great king was cursed to become a demon for no fault of his, which resulted in the birth of Ravana and his race of demons. We read in detail all the subsequent developments, such as the establishment of the demon kingdom in Lanka, how Ravana spread terror in the world which led mother earth and the gods to request the Supreme Being to intervene and save the world, and the Lord promising to manifest himself as Lord Ram. To carry out his promise, Lord Ram manoeuvred things so that his wife Sita was abducted by Ravana, giving the Lord an excuse to eliminate the demons and end their tyranny by killing them in the ferocious War of Lanka that followed, in which not only Ravana but even all other demons of his race who fought the war were graciously granted deliverance, emancipation and salvation by Lord Ram.
The Book has a total of 22 Chapters that are spread over 5 volumes.
This is the 1st Volume. It contains an elaborate Preface that explains the Title, an Introduction, which is followed by Chapter nos. 1 to 5. These Chapters cover the 1st part of the Story: i.e. the events of Ravana’s previous life that led to the birth of the demon race and the establishment of the demon kingdom, how they spread terror in the world which compelled mother earth and the gods to ask the Supreme Being to intervene and rescue them, and the Lord’s promise in this regard. To fulfil this promise, the Lord manoeuvred things in such a way that Sita, Lord Ram’s wife, was abducted by Ravana, paving the way for the epic War of Lanka that would end the reign of terror of the demons.

Be the first one to write a review for the book Story of Ravana and the Epic War of Lanka Told in Slow Motion Part 1.