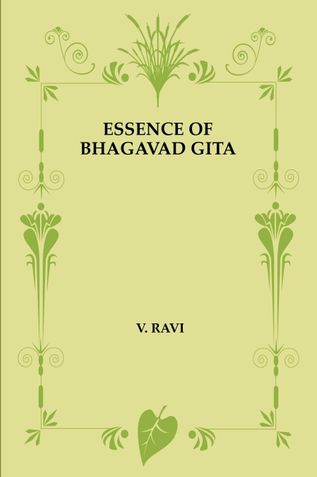 Bhagavad Gita is the condensed form of all the 108 Upanishads put together. Bhagavad means the Brahman and Gita means song. If one needs a literal translation of Bhagavad Gita, then it is “the song of the Brahman”. Bhagavad Gita consists of 700 verses, mostly addressed by the Brahman, wherein He imparts the supreme knowledge to one of His creations. Brahman in this context is Lord Kṛṣṇa, the incarnation of Vishnu or Narayana and the disciple is Arjuna, one amongst the five Pāṇḍava-s. Since they were fathered by the king Pandu, they are called Pāṇḍava-s. Pāṇḍava-s are five brothers, each of them representing the five basic elements of the universe. It must be remembered that these five elements rule the five chakras, muladhara to vishudi. The verses of the Gita are in the form of questions and answers. Arjuna, the warrior clears his doubts from Kṛṣṇa in the midst of a battle field. Kṛṣṇa represents the Brahman, Arjuna represents soul and battle field represents the sensory organs of the gross body. The teachings of Kṛṣṇa in Bhagavad Gita are practical and easy to follow. The concept of life is explained in these seven comprehensive verses in eighteen chapters. If one decides to follow the teachings of Kṛṣṇa, he is not reborn. Even during this birth, if the sermons of Kṛṣṇa are followed, one will not feel the miseries and sorrows. The cause and source of sufferings and the ways and means of getting rid of them are expounded. After all, it is the teaching of the Brahman Himself.

Kṛṣṇa talks about the various stages of consciousness citing differentiation between a jnani, a yogi and a devotee. Gita deals with material, astral and spiritual planes corresponding to body, mind and soul. Every word used by Kṛṣṇa has deeper meanings. Great scholars have labored to bring out the hidden treasures in each word. The word of the Brahman obviously is difficult to interpret. We have been discussing about „karma‟ frequently. Kṛṣṇa‟s interpretation of karma and its effect on the soul is beyond comprehension. The superior relationship between the Brahman and soul is also explained. If one wants to deliberate on Gita beyond its gross meaning, there is no end to it and possibly nobody can find an end. It will be an eternal unanswered question. For every word of Kṛṣṇa, there are gross and subtle meanings. Gross meaning can be understood by a devotee and subtle meaning can be understood by jñāni-s and yogis. An ordinary devotee can progress to the stage of jñāni and yogi, if he is able to cleanse his consciousness by discarding the bad master of a man called ego. When you say „I‟ it indicates your ego and when you say „I am That‟, it indicates your jñāni status. When „I am That‟ is dissolved and merged with cosmic consciousness, it is self-realization, the stage of yogi. For a yogi nothing exists except the Brahman and he will not for a moment use „I‟. If at all he uses „I‟ it will mean to refer the Brahman. A yogi is a self-realized person.

Gita introduces us to sanatana dharma. Sanatana dharma means the eternal dharma that never undergoes changes and is distinct from the material dharma. Every action done to improve the material prosperity is material dharma as opposed to sanatana dharma, which is beyond mind and body. Though eternity is embedded in our consciousness, we are unable to realize it, as we stand attached to materialistic world. Kṛṣṇa guides us through his sermons to understand sanatana dharma, by modifying the level of our consciousness so as to recondition the soul within us. Nobody knows the origin of sanatana dharma. Since it has no origin and no end, it clearly indicates the concept of the Brahman as Brahman alone has no origin and no end.

Individual verses are not published and only the essence of each verse is published. Several verses are grouped together for easier understanding.

This book is authored by V.Ravi. He shares his spiritual experience through detailed discussions on Self-realization, interpretation of Indian Scriptures, simplified guidance to kundalini meditation, explanation on mantras, etc. From the year 2000, he has devoted his entire time to writing. He has spent considerable time in studying Indian scriptures, particularly Advaita philosophy, which is the foundational aspect of Indian philosophy. He uses simple language to explain Sanskrit words, which become an integral part while understanding sacred Indian Scriptures.

Be the first one to write a review for the book ESSENCE OF BHAGAVAD GITA.