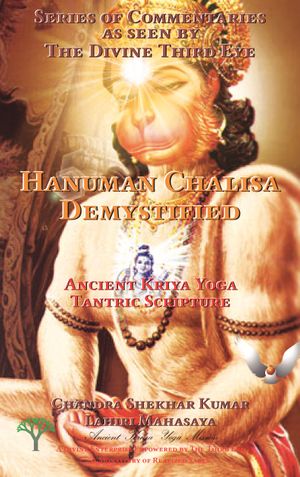 <b>Ancient Kriya Yoga Tantic Scripture : Commentaries on Hanuman Chalisa as seen by The Divine Third Eye.</b> <br><br> This book is an outcome of inner revelations of mystical meanings of Hanuman Chalisa. Penning down itself was full of eternal vibrations which resembled as if being dictated by a Siddha. This journey was full of inexplicable ecstasy and joy, laced with complete surrendering to witnessing the state of Hanuman. It depicts transcendental qualities and attributes of this state in its totality. <br><br> <b>This body is just an instrument of meditation and the individual is nothing, the individual have nothing.</b><br><br> Hanuman is a special state of Siddhas, the qualities of which are described by Hanuman Chalisa. A Sadhak passes through infinite number of states during his Sadhana. Period of stay in any state varies depending on the peculiarities of that state as well the predicament of the Sadhak. During this course, the outer symptoms may not be described and grasped as aptly as inner symptoms. Outer symptoms like trembling and/or levitation of body often lead to bewilderment and amusement of the beholder. Whereas being in the same state, it leads to calm acceptance and grasp of what is happening to someone else being in that state. <br><br> Hence irrespective of the peculiarities and idiosyncrasies associated with various paths, the Sadhak finds himself in a special state all of a sudden, often termed as being at one place in Siddha Loka. Gradually, he realizes that there are infinite such states, hence places in Siddha Loka, one of which is Hanuman. It becomes clear to him that practice (Sadhana) is gradual, but being in any such state is all of a sudden, involuntary ones during early stages of Sadhana. <br><br> There is no single prescribed path for Sadhana, simply because it varies from Sadhak to Sadhak, the root of which is often buried deep in one's Providence(Prarabdha). Hence no matter which path a Sadhak adopts for his journey to start with, he will get aligned to the best path, most suitable one for him, in due course of time, gradually. The single most important key is : <br><br> <b>Continue seeking in with utmost Sincerity and Devotion.</b><br><br> Historians often attribute the composition of Hanuman Chalisa to Goswami Tulsi Das, whereas a Sadhak realizes, when time is ripe for him, that the particular Shabda is eternal, ever present, everywhere, perceptible to one only when one is ready during his course of Sadhana, including listening to these being chanted/sung by Siddhas, all the time, beyond the time. <br><br> <b>This book is dedicated to all Sadhakas.</b>

Be the first one to write a review for the book Hanuman Chalisa Demystified.