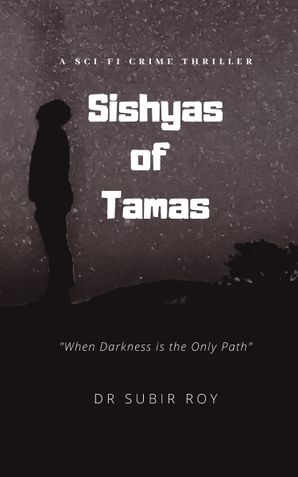 When Darkness Is The Only Path

"He is looking for her. But she does not know he exists. Neither can one hope that she is aware of the story that has brought him here. He knows no one will recognize him; but still he treads carefully. He is standing near the entrance and surveying the main hall. The hall is filled with elegant looking men all following a dress code - black suit, black trousers, white shirt, black shoes and face covered with a Halloween mask. And there are these beautiful young women dressed in red saris. But their faces bear a weird feature - they are plain and blank, as if they are incapable of making any facial expressions.
But, not for long. Their faces will change. Soon. Any moment now."
This story is about a poor PhD student, Jay Marathe, who is going through a very rough phase of life. He has just lost his father and soon discovers that his mother is suffering from Lung Cancer. In his search for hope, he ends up partnering with a local corporator- Sushil Patil, and a self-styled god- man Mahadev Maharaj. This partnership changes Jay's life completely. He is now able to take care of his mother's treatment, and his life is no longer that of a poor man.
But, what appears to be a boon, is actually a curse. Sushil and Mahadev are not really helping Jay for free. They use Jay's knowledge in erasing memories of girls they keep at Mahadev's ashram. Mahadev's ashram is not an ashram- it's actually a hidden brothel.
Jay's conscience is crying; but looking at his mother getting treated, he continues. It's only when he tries medicating a new girl, Mamta Paharia, that his conscience breaks. He resolves to rescue Mamta from the clutches of her kidnappers. But, unfortunately, Sushil Patil gets to know about Jay's plans and the goons attack Jay with the intent of eliminating him.
Jay's body is disposed off and Mamta is recaptured by Sushil Patil and his goons. This is where the wheel of fortune favors Jay. The attack was brutal and could have been fatal- but before Jay could breathe his last, two local villagers- Darshan and Gajanan- discover Jay's body. Their timely help pulls Jay out of the tentacles of death. As Jay recovers, he makes it his life's mission to destroy Sushil Patil and Mahadev Maharaj and rescue all the girls lying trapped in Mahadev's ashram.
Assisted by Darshan and Gajanan, Jay utilizes all his resources and knowledge and comes up with a fool-proof plan. The strength of this plan lies in the same science that once Jay had used to erase memories of the kidnapped of girls, while he was working for Sushil Patil and Mahadev Maharaj.
As Jay executes his plan, he ends up killing the kidnappers successfully, and eventually rescues all the girls to freedom.

Dr Subir Roy is a trained medical doctor and is a passionate writer. “Sishyas of Tamas” is his first novel. His writing style is heavily influenced by the works of Michael Crichton. He likes to involve scientific content in his story-telling, and does a lot of research on the same to ensure that the facts and the concepts are sound and authentic.
Dr Subir Roy currently lives in Gurgaon. Apart from writing he loves playing chess and reading.

Be the first one to write a review for the book Sishyas of Tamas.