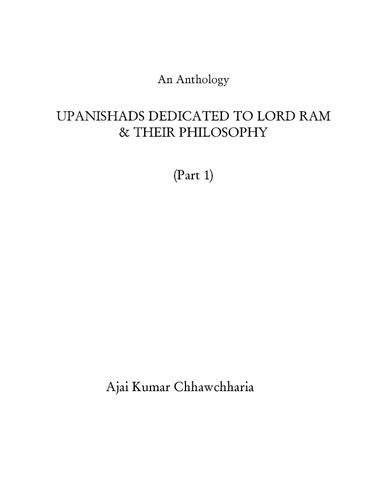 This Holy Book titled “Upanishads Dedicated to Lord Ram” is in TWO PARTS—viz. Part 1 and Part 2.
It is a unique, rare and an excellent presentation of all the Upanishads dedicated to Lord Ram, all of which have been brought together under the cover of a single Book in a bilingual format (Hindi + English) for the first time in the world.
Since this was a voluminous work, it became expedient to split it into TWO PARTS. However, it is advised and imperative for the reader to have both the parts concurrently as they together complete the full Book, and having the two parts at hand would make the reading seamless and understanding of the Upanishads easy as all of them are inter-related.

This present volume is Part 1 of the 2-Part Book, and it contains the following three Upanishads: (i) Ram Purva Tapini Upanishad, (ii) Ram Uttar Tapini Upanishad, (iii) and Ram Rahasya Upanishad.
All the other Upanishads dedicated to Lord Ram, viz. (i) Mukti Upanishad, (ii) Kalisantaran Upanishad, (iii) and Sita Upanishad have been included in Part 2 of this Book.
Further, there are three Appendices added to Part 2, the first describing what a Upanishad is, the second quoting around 60 wonderful verses selected randomly from a wide swathe of Upanishadic Texts that bring to the reader the salient philosophy and teaching of these classical spiritual & metaphysical scriptures which have no parallel in the world, and the third gives the Key by which one can read the English Transliteration of the Sanskrit verses. The ‘Worship Instrument’ used in formal rituals has also been added.
The Book contains the full Original Texts of the Upanishads with their verse-by-verse Roman Transliteration, followed by Hindi and English renderings and detailed explanatory notes in a simple language. This approach will surely make this Book exceptionally useful to even the lay reader, as much as it would be of great help and of reference value to the researchers and scholars of ancient Indian scriptures, philosophy and classics, both the temporal and the spiritual.

Be the first one to write a review for the book An Anthology: UPANISHADS DEDICATED TO LORD RAM & THEIR PHILOSOPHY: Part 1.

Self healing -Path to your Soul
smrati sharma

The Science Of Karma
Dada Bhagwan