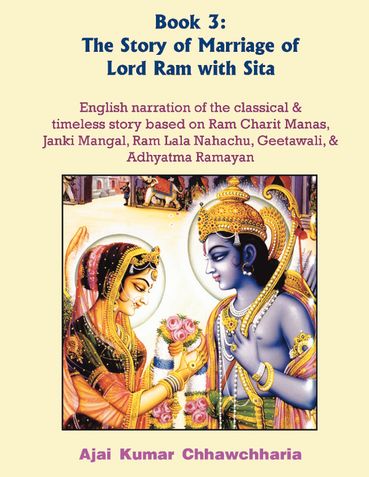 Book 3: The Story of Marriage of Lord Ram with Sita (eBook)

This is the 3rd Part of the Omnibus Edition of the 3-Part Book titled “The Story of Lord Ram’s marriage with Sita”.
This is a lengthy story spanning five classical books, viz. Goswami Tulsidas’ (i) Ram Charit Manas, (ii) Janki Mangal, (iii) Ram Lala Nahachu, (iv) Geetawali Ramayan, & (v) sage Veda Vyas’ Adhyatma Ramayan.
Since the real joy would come with delving deeply into the story without cutting corners for sake of brevity, allowing one’s self to leisurely enjoy its beauty and charm that are nectar-like—and also because I wished to present to the reader a detailed account of the entire event in a chronological manner and exactly as they are narrated in the original texts, while doing my best to explain the text in a fine manner and endeavouring to bring out many subtle meanings and nuances that are not apparent and would be missed if I had attempted for brevity in my narration to shorten it—this volume became so thick that it needed Three Books to do justice to the story itself.
All the Three Parts of this Book have the original Text along with their verse-by-verse Roman Transliteration which is followed by a detailed exposition in English with further notes.
Book 3 has four Sections as follows:-
Section 1 has the entire text of the story from Tulsidas’ classic narration of the event in his book titled “Janki Mangal”.
Section 2 similarly consists of the entire text from Tulsidas’ short book called “Ram Lala Nahachu”. It pertains to a specific ritual known as “Nahachu” in which the groom’s hairs and nails are trimmed just before the actual marriage ceremony.
Section 3 is a wonderful and elaborate narration of the story from “Geetawali”, an exquisite ‘Book of Songs’ in which Tulsidas has written the story of the ‘Ramayan’ (the story of the life and times of Lord Ram) using the pattern of writing of verses that are set to different ‘Ragas’ (notes, tunes and modes) of Indian classical music so much so that the story of Lord Ram’s marriage with Sita acquires a magical charm and a special aura of divinity around it as it can now be sung melodiously to the various tunes of Indian classical music with a liberal dose of devotional quotient infused in it.
Section 4 presents to the reader a different take on this story from “Adhyatma Ramayan”, an ancient classical composition in Sanskrit by the legendary sage Veda Vyas. It deals with this story with a different perspective and tells the reader many facts not dealt with by Tulsidas.
Taken all in all, it’s an exceptionally charming story that captivates the mind and the imagination of the reader, and holds him or her in its thrall. It’s a wonderful and rare collection of eclectic classical texts that will give the reader an opportunity to enjoy this story from different perspectives.

Book 3: The Story of Marriage of Lord Ram with Sita

Be the first one to write a review for the book Book 3: The Story of Marriage of Lord Ram with Sita.

Do Not Take This World Seriously!
Kishor Kulkarni