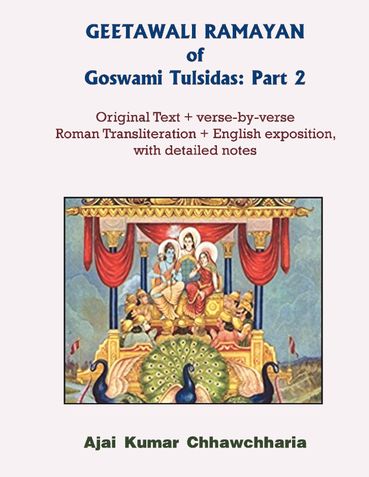 This is the 2nd Part of the Book ‘Geetawali Ramayan’ which is in 2 Parts. The 2nd Part contains Chapters 3—Chapters 7 of the Text of the Book (viz. Aranya Kand, Kishkindha Kand, Sundar Kand, Lanka Kand & Uttar Kand), followed by 3 Appendices (viz. Appendix 1: Main Characters of the Story; Appendix 2: Brief outline of the Story; and Appendix 3: A Prayer from the Author’s Heart).
The first two Chapters of the Book (viz. Baal Kand & Ayodhya Kand) appear in Part 1 which is published simultaneously alongside this 2nd Part.
‘Geetawali Ramayan’ is the legendary story of Lord Ram that was written by saint-poet Goswami Tulsidas as part of his Trilogy on Lord Ram’s life and time—popularly known as ‘Ramayan’. The other two books in this Trilogy are Kavitawali and the epic Ram Charit Manas. Each of the three books of the Trilogy is a masterpiece in itself. The other two books would also be made available by this author as soon as they are ready for publication.
‘Geetawali’ tells the divine story of Lord Ram by employing the universal charm of a ‘song’ in its narrative. Each episode in the Lord’s life has been rendered in a set of verses that are set to different ‘Ragas’ which are melodious tunes of classical Indian music. This unique style makes the narrative endearing to the heart and the mind of both the narrator and the listener; it adds magnificence of flavour to the narrative and makes it exceptionally charming and appealing to all the people irrespective of their individual tastes and preferences, because music is a language that has a universal appeal even if the listener is unaware of the details of the story and may not understand each word of the narrative.
This technique of ‘singing a song’ while describing Lord Ram’s life and time brings the benefits of hearing something which is inherently holy and divine within the reach of everyone; its spiritual and emotional rewards are enjoyed by all, and all find joy, delight and bliss in it. It captivates the mind and the heart of the listener and the narrator alike, more than any other style of narrative, and if one is fortunate to find someone who can sing this story in accordance to the Ragas in which it is narrated, its effect is simply spell-binding and mesmerizing, and it instantly transports the hearer as well as the singer into a world that is marked by transcendental bliss.
It is a unique Book from one of the greatest poet-saints of medieval India, Goswami Tulsidas, which not only tells a classical tale but is injected with the nectar of love and devotion for the Divine Being, the Lord God, in the form of Lord Ram.

Be the first one to write a review for the book GEETAWALI RAMAYAN of Goswami Tulsidas: Part 2.