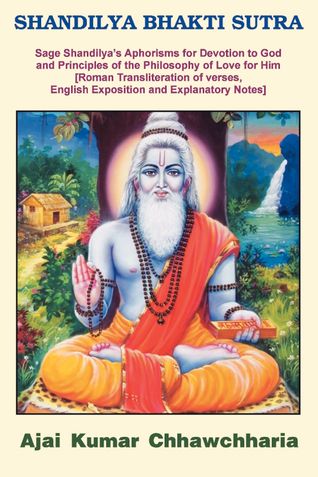 Sage Shandilya’s Aphorisms for Devotion to God and Principles of the Philosophy of Love for Him [Roman Transliteration of verses, English Exposition and Explanatory Notes]

‘Shandilya Bhakti Sutra’ is a Book of 100 Aphorisms on Bhakti, the path of devotion, affection and love for Lord God. It was enunciated and expounded by sage Shandilya who was a great illustrious sage of ancient India, belonging to the period of the Upanishads and the Purans. This Book removes all doubts in the mind of a seeker regarding the importance of Bhakti, and why it is an important spiritual tool and the best path to God-realisation.
All learners need an easy to read and understand guide-book to help them grasp the essentials of the subject of their interest. Similarly on the spiritual path too an aspirant would need guidelines and a road map to show him the correct way forward, to tell him what to do in order to achieve success in his spiritual endeavours and warn him against the various pitfalls and how to avoid them, to provide him with some benchmarks against which he can judge his success, and at the same time tell him the wonderful reward that awaits him if he follows the instructions properly.
In the spiritual realm, Bhakti (devotion, affection and love) for Lord God is of tremendous and singular importance. There are scriptures that deal with this eclectic spiritual theme, but they are so many of them, so vastly scattered and voluminous, and so varied in their contents and different in their prescriptions that a devotee is more likely to get confused and lost in the maze of advices given by them than actually be able to benefit from reading them. The present book “Shandilya Bhakti Sutra” fulfils this necessity—as it presents the guidelines of Bhakti in a very precise and concise form in a language that is easy to understand.

Be the first one to write a review for the book Shandilya Bhakti Sutra.