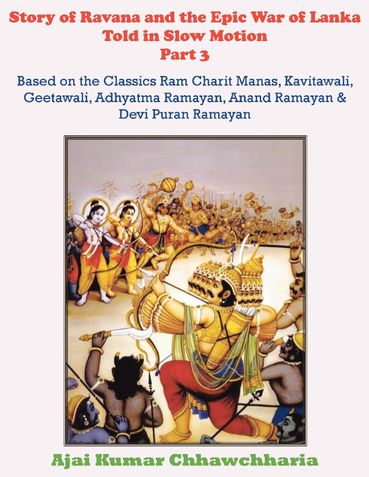 This is the 3rd Volume of the 5-volume book titled ‘Story of Ravana and the Epic War of Lanka’.
In volume nos. 1 and 2 we have read about Ravana’s birth, establishment of the Demon kingdom, spread of terror by Ravana and his clan, the Supreme Being’s promise to mother earth and the gods to eliminate this scourge, of the Lord fulfilling this promise by manifesting himself as Lord Ram and getting his wife Sita abducted by Ravana, about the great search launched to trace her, of Hanuman discovering her in Lanka, about the Burning of Lanka by Hanuman, and the preparation by Lord Ram to launch a military campaign to free her by eliminating Ravana and the demons he led.
Now in this 3rd Volume we proceed further with the Story. This volume has Chapter nos. 8 to 14 (i.e. 7 chapters) wherein we read the following episodes in vivid detail: Lord Ram assembles a huge army of monkeys and bears and arrives on the shore of the ocean in order to cross it to reach Lanka; Vibhishan joins Lord Ram because he was insulted and kicked out by elder brother Ravana; a floating bridge was constructed across the ocean that helped Lord Ram and his army to land on the soil of Lanka; many failed attempts made by Ravana’s wife Mandodari who did her best to try and persuade the demon king to avoid the impending ruinous war; Lord Ram sends Angad as his emissary to Ravana to explore a peaceful method to end the stalemate, but the mission failed as Ravana was stubborn; and then the actual War begins with the first wave of attack by Lord Ram’s ferocious army.
All these episodes have been elaborately and vividly described in this 3rd Volume.
Once the savage war started, all hell broke lose. So what happened then? Well, the reader would read all about it in the next volume nos. 4 to 5 that follow.

Be the first one to write a review for the book Story of Ravana and the Epic War of Lanka Told in Slow Motion Part 3.

I, She and the Sea
Dr Tapan Kumar Pradhan