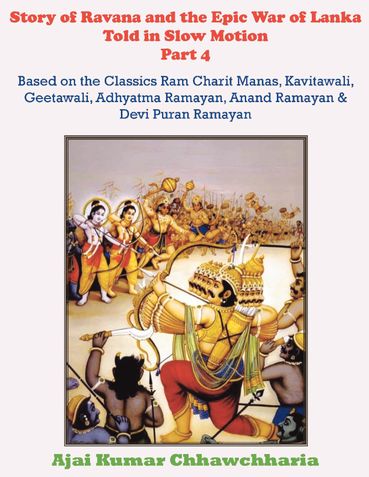 This is the 4th Volume of the 5-volume book titled ‘Story of Ravana and the Epic War of Lanka’.
In volume nos. 1 to 3 we have read about Ravana’s birth, establishment of the Demon kingdom, spread of terror by Ravana and his clan, the Supreme Being’s promise to mother earth and the gods to eliminate this scourge, abduction of Sita, and all subsequent developments that culminated in the commencement of great War of Lanka. All these episodes were covered in Chapter nos. 1-14.
Now, in the present Volume no. 4 we have Chapter nos. 15-19 (i.e. 5 chapters) wherein we read in vivid details the following episodes: (i) The two battles between Laxman (Lord Ram’s brother) and Meghanad (Ravana’s son), in the 1st of which Laxman was grievously wounded, and the 2nd battle in which Meghanad was killed by him. (ii) The battle between Kumbhakaran (Ravana’s brother) and Lord Ram, in which the former was slayed after a ferocious duel. (iii) The legendary battle between Ravana (the king of the demon race) and Lord Ram, which culminated in Ravana’s death and deliverance of his soul. (iv) And, Vibhishan being appointed as the next King of Lanka.
All these episodes have been elaborately and vividly described in this 4th Volume.
In the next and the final Volume no. 5 in this series, we shall continue with the Story and read about the important developments that followed the victory of Lord Ram in the epic War of Lanka.

Be the first one to write a review for the book Story of Ravana and the Epic War of Lanka Told in Slow Motion Part 4.

The Upanishads: The Science of Freedom from Bondage
T.N.Sethumadhavan