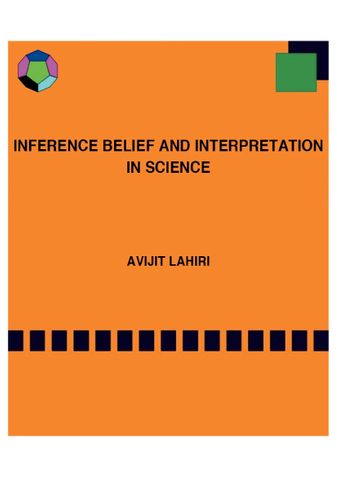 'Inference Belief and Interpretation in Science' is an in-depth and engaging discourse on the deeply cognitive roots of human scientific quest. The process of making scientific inferences is continuous with the day-to-day inferential activity of individuals, and is predominantly inductive in nature. Inductive inference, which is fallible, exploratory, and open-ended, is of essential relevance in our incessant efforts at making sense of a complex and uncertain world around us, and covers a vast range of cognitive activities, among which scientific exploration constitutes the pinnacle.

Inductive inference has a personal aspect to it, being rooted in the cognitive unconscious of individuals, which has recently been found to be of paramount importance in a wide range of complex cognitive processes. One other major aspect of the process of inference making, including the making of scientific inferences, is the role of a vast web of beliefs lodged in the human mind, as also of a huge repertoire of heuristics, that constitute an important component of ‘unconscious intelligence’. Finally, human cognitive activity is dependent in a large measure on emotions and affects that operate mostly at an unconscious level. Of special importance in scientific inferential activity is the process of hypothesis making, which is examined in this book, along with the above aspects of inductive inference, at considerable depth.

The book focuses on the inadequacy of the viewpoint of naive realism in understanding the context-dependence of scientific theories, where a cumulative progress towards an ultimate truth about Nature appears to be too simplistic a generalization. It poses a critique to the commonly perceived image of science where the latter is seen as the last word in logic and objectivity, the latter in the double sense of being independent of individual psychological propensities and, at the same time, approaching a correct understanding of the workings of a mind-independent nature. Adopting the naturalist point of view, it examines the essential tension between the cognitive endeavours of individuals and scientific communities, immersed in belief systems and cultures, on the one hand, and the engagement with a mind-independent reality on the other. In the end, science emerges as an interpretation of nature, which is perceived by us only contextually, as successively emerging cross-sections of a limited scope and extent. Successive waves of theory building in science appear as episodic changes in perspective, rather than as a cumulative progress towards some ultimate truth.

The presentation is lucid, informal, and non-technical, but cogent and authentic, making for a compelling reading. Basing on major trends of research in the area the book focuses on – a broad and interdisciplinary one – I present a view of how science inquires into nature that is at once informed, interesting, and intriguing. The book is meant for non-specialists, but will hold the interest of specialists as well. It is easy reading, witty at places, but deep and serious.

Written in ten chapters, the book covers a wide territory, but is is brief and provoking.

Avijit Lahiri is a renowned researcher and teacher in physics. He has published a good number of papers in peer-reviewed journals of international repute and is the sole author of several text-books and reference books. He has lectured widely on topics in physics as also on topics of general scientific interest before specialists and general audience.

All his books have been appreciated by students and teachers alike.

Dr. Lahiri is now retired from active research and has engaged himself in the writing of books and articles spanning a wide range of subject areas.

Inference Belief and Interpretation in Science

Be the first one to write a review for the book Inference Belief and Interpretation in Science.

Other Books in Medicine & Science, Philosophy