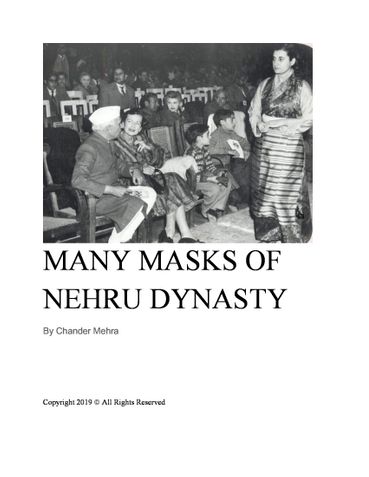 Many Masks of Nehru Dynasty (eBook)

My most crucial lesson as a journalist has been to be skeptical about all wild claims by and about leaders, My logic is simple: the truth is paramount. We are not allowed to experiment with truth like Mohandas Karamchand Gandhi, the Mahatma. Nobody has the right to play with the minds of the masses even when there is clear cut evidence.

Then there is this saying about smoke being foolproof evidence about the existence of fire. I am not too sure of this. Besides, we are not dealing with smoke, not even infernos. We are dealing with fire, all-consuming fire, or forest fire, if you please.

Chander Mehra, 85, a low-profile veteran, distinguished himself as Africa Bureau Chief of The Statesman, Training Editor of Nation Media Group, Kenya, and Africa representative of the media freedom watchdog International Press Institute as well as Guest Professor at the Post-graduate School of Journalism - without winning any accolades.

He has re-launched himself after long illness, with some excellent books including Corruption Dealing with the Devil, and The Curse of Money-Laundering, and more on the way.

Detained once during the Emergency, and thrice by African tyrants, he has interviewed Indira Gandhi, Morarji Desai, Chandrashekhar and several African leaders.

He is respected for his proclivity to pick controversial subjects for his books and commentaries.
Mr. Mehra also edited the manuscript of Jayaprakash Narayan’s Total Revolution.

Indira Gandhi had him detained for doing so. He writes for fulfillment. not fame and fortune, controversial without malice, in quest for excellence, without being rewarded.

Many Masks of Nehru Dynasty

Be the first one to write a review for the book Many Masks of Nehru Dynasty.