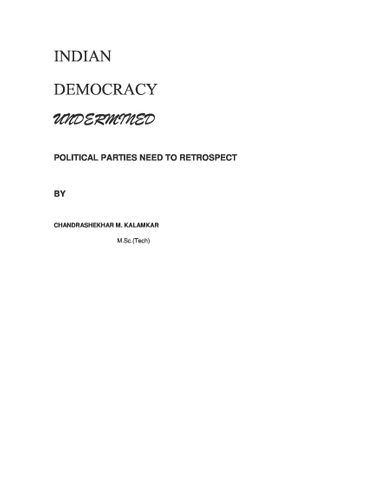 I am presenting book “INDIAN DEMOCRACY -UNDERMINED” to restore lost track of Democratic Principles in India which is quite alarming.

I have proposed to end existing wrong Policies in India, Corruption and Terrorism, since 2009.

I have drawn attention to this critical matter and requested high level authorities, the copies of Letters are consolidated and becoming the part of this book.

We are in general talking about bad practices, corruption, terrorism, scams, harassment, injustice, under development, non development, at the Government level, and bureaucratic level. But my study and observations since last many years put the blame on the system which governs the nation.

Anarchy is the result of gross violation of system by those people who are elevated and selected to run the system, meant to govern the livelihood of millions of peoples.

Blame goes on either to the system overall at one side and at the other side it goes to the caliber of the people who are there to operate the system.

First of all, I put blame on the system which governs the life of people. Just like fault in the machine of jet plane or vessel can take one to undisclosed place, or faulty part of missile cannot achieve any desirable result.

Like this faulty governing system for masses, with undesirable restrictions, help operator of the system to adopt practices of harassment, which leads to non development, injustice, corruption and ends with scams and upsurge in terrorism.

At the other side, operators of the system if are incompetent, unrealistic, impractical, then system itself is likely to fall flat.

My sincere concern is towards the sorry state of system and approach of the system operators, which hamper the growth and prosperity of my motherland .

1. Lecturer ship in Geology & Mining at Polytechnic College, At Katol and At Kamptee, for the total duration of 2 & ½ yrs.

2.Geologist with Limited Company, Nagpur , for the period of 2& ½ years under the guidance of Retired Controller of Mines , IBM, Nagpur, with wide exposure to Mines & Mineral and mineral based industries, prospecting ,preparation of project reports, preparation /submission and processing of documents for mining lease ,survey and administrative and sales related work in their associate concern.

4. Associated with YCMOU, Nashik Since 1993 till 2001, as a Computer Work Center and External Examiner, and till 2008 as an External Examiner for Computer Practical courses and Theory examinations of other Graduate and Postgraduate courses of YCMOU.

5. Interested in the field of Astrology since childhood, has studied various books and journals of Dr. B.V.Raman, renowned Astrolger.Study and research work still continue.

6. My proposal to Late Prime Minister, Shri Rajivji Gandhi, dated 19-12-1987, regarding “Decentralization of Administrative System in India”, was widely discussed and proposal was forwarded to various ministries and discussed. Parliament discussed and passed Panchayat Raj and Nagarpalika bill in the year 1994.

Be the first one to write a review for the book INDIAN DEMOCRACY- UNDERMINED.

The Seed of Race: An Essay on Indian ...
Sir John Woodroffe