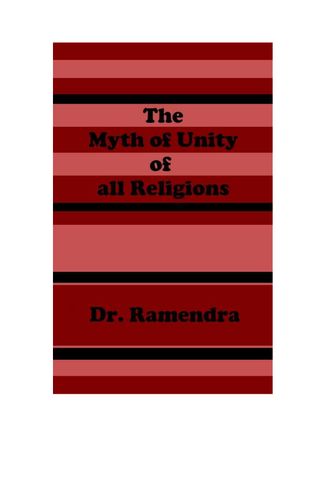 The Myth of Unity of all Religions (eBook)

In a scholarly and logical discourse, full of authentic references to the basic beliefs of major religions of the world, the author, Dr. Ramendra, ably explodes what he calls “the myth of unity of all religions”.

'The Myth of Unity of all Religions' was first published in print edition in 2003. It has been republished in several journals, including 'Humanist Outlook' (New Delhi), 'Indian Skeptic' (Tamilnadu), 'The Modern Rationalist' (Chennai), 'The Radical Humanist' (Mumbai) and 'Understanding Sikhism' (Canada).

“Attempts have been made by several religious thinkers to synthesize various religions in order to remove the conflict among them. It has been maintained by some that (i) all religions are basically the same, and there is a “rock bottom unity” among all religions; (ii) that all religions are true, and (iii) that different religions are paths leading to the same goal, and so on. This view, though well-intentioned, is a myth. I propose to call it “the myth of the unity of all religions” and the purpose of my essay is to explode this myth.”

“No two religions share all their fundamental beliefs. If they did, they would not have remained two separate religions. Therefore, there is no rock-bottom unity among different religions. Instead, what we find is conflicting truth-claims and discord.”

Ramendra Nath or "Dr. Ramendra" is presently working as Associate Professor and Head of the Department of Philosophy at Patna College, Patna University, India; where he has been teaching for twenty-eight years.

Dr. Ramendra is the author of nearly thirty books and booklets in Hindi and English, including 'Why I am Not a Hindu', 'Is God Dead?', 'The Myth of Unity of all Religions' and 'Some Reflections on Ethics'. Besides, he has written hundreds of articles in newspapers, magazines and journals.

Be the first one to write a review for the book The Myth of Unity of all Religions.