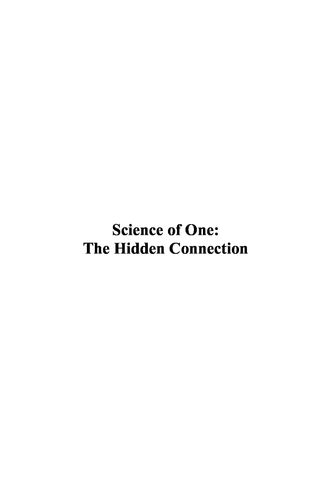 Science of One: (eBook)

Have you ever stood in awe of the world and simply wondered what lies at the heart of it? Self proclaimed author Eric Arthur Ross, a fanatical researcher in the fields of science and religion pushed himself to the edge of madness in the chaos of trying to understand God. Through insomnia, long hours of meditation, asceticism, and learning Hebrew, philosophy, theology, psychology, hypnotism, and theoretical physics- The Science of One shares the uncanny results of this extensive research in the profound theory of an underlying unity in all things. It not only bridges the gap between Science and Religion, but shares the highlights of a spiritual journey across the world which lasted nine very long years.

To further research the Oneness of the Universe through Scientific and Ancient principles, the Author expands on Theories which go deeper into Religion and farther into Science than few have ever gone. They include Bell's Theorem, Plant Science, The Bible, Hindu Upanishads, Buddhist Philosophy, Kabbalah, Chinese Taoism, Egyptian lore, Greek philosophy, Quantum physics, and a Unifying Theory of Mind & Matter.

When I turned eighteen I gave all my possessions to my friends and left everything behind. I gave up the idea of ever having a girlfriend or that I would even see my family or friends again. I left for Israel in order to find myself and the meaning of life. This turned into a nine-year expedition around the globe.

I ransacked libraries, spent freakishly long hours in meditation, learned Hebrew, became an ascetic, spent a night in the Pyramid, and studied everything I could get my hands on. I delved into philosophy, physics, theology, psychology, and hypnotism. I couldn’t stop until I found out what life was made of, and who God was. The more I learned in life, the harder it became to find answers. Eventually we have to tread where there is no path and the higher the mountain you climb, the farther you can see, but remember that it is very lonely at the top. Some of the places I have passed through since than include:

My first destination was a three week layover in Rome before my arrival in Israel. When I got to the Basilica of St. Peter, the biggest church in the world, I was awestruck and taken back by its vast size. An immense crowd of people gathered there, and everyone appeared overjoyed as they entered the building through this towering monumental door called the “Holy door”. I asked somebody about this and learned that it was the Jubilee year, wherein this Holy door is opened only on special occasions and symbolizes the remission of debts as you pass through it. However, it was more than absolution of debts for me; it was the beginning of a Journey.

Be the first one to write a review for the book Science of One:.

Disciples of Jesus Christ to Make Disciples For ...
Theodore Andoseh