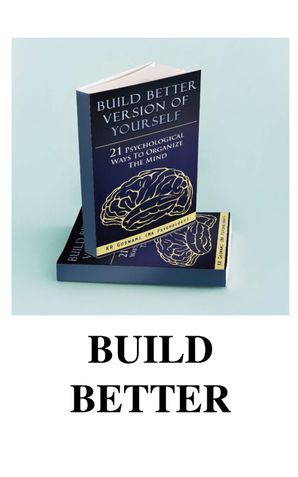 BUILD BETTER VERSION OF YOURSELF (eBook)

21 Psychological Ways To Organize The Mind

“Your top priority should be yourself. If you can’t make yourself a priority, you won’t able to make other people a priority either.”- Avina Celeste

Do you know the personality disorder of a person and unpredictable behavior that can result into disaster?

* Rock and roll king who owned private jet and luxurious cars with a worth of 500 million dollars found dead in bathroom due to emotional instability in his younger age !

* The CEO whose giant company crossed the worth the GDP of 130 countries died due to physical ailment in his fifties !

* Recently a world class fashion designer, blogger and author died at the age of 40 due to stomach cancer ! and

* A film actor committed suicide at the age of 34 !

"Who will be the next victim?"

We can not totally stop these unusual happenings but we can moderate to a great level if we apply certain principles in our life. Author has tried to present 21 different psychological ways which will not only compare your existing level of personality traits but will make drastic changes to eradicate, resolve or at least moderate violent issues in today's hectic life of people.

It will be easier to understand and experience difficulties and rise to a desired level of happiness in each area of life if tips given in this book are applied. The examples and messages have been derived from best seller authors, psychological inferences and wide range experiences from Armed forces to corporate sectors.

About the Author
Author had 15 years of active service in Indian Air Force as an Airmen. He worked on Aero Engines of various aircrafts equipped in Armed forces. He was working in trade of Engine fitter and had a specialization in Helicopter engines. During his service in Air Force he was posted to different parts of the country including Leh-Ladakh as well as Jammu and Kashmir. He was part of various operation of Armed Forces like Blue start operation, Blast Track operation and Passive air defence during peace time. He worked not only in Air Force Units but also rendered service in Army in units of Air Defence Regiments. Along with the Equipment and Aircrafts he was also trained in Arms and ammunition like .303 rifles and LMGs. While working on the aircrafts he discharged the duties of Guard commander and preserved various security levels of Air Force at different units. As a senior non commissioned officers he also worked as a supervisor in canteen store departments and unit run canteens. He recently published his military biography. Apart from real life story the book ‘What I will be remembered for’ also narrated the glimpses of various operations during war time and familiarized various gallantry awards.
The author was also manager in State Bank of India for 24 years in supervisory cadre. He discharged the duties of field officer, account officer and branch manager in various branches of Gujarat. He had maintained and upgraded various branches as ‘Exceptionally well run’ and met the requirements of levels aspired by the Bank. During various line segment assignments he managed men and material with adequate moral boosting of workmen. He worked as a joint custodians of Reserve Bank of India for several years and maintained cash flow for ATM replenishments and Currency Administrative Cells of branches of SBI and other banks. He was awarded best branch manager of State Bank of India in the year 2014-15.
The author is had masters in psychology in 1986 from one of the universities from South India. During his active service in Armed forces and corporate sector, he guided organizations and individuals by the virtue of his experiments and experiences to resolve day to day issues. He acquired skills of computers by studying DISM and PGDCA from Saurastra University along with the degree from APTECH. While serving in the bank he also imparted skills to students in spare time with morning and evening classes by teaching them MS office, C++, visual FoxPro, visual basics and website designing.
The author has hobby of vocal and instrument playing like harmonium, guitar, flute, mouth organ and violin. Being an artist of All India Radio, he performed several programs over radio and stages in different parts of the Gujarat. Author is presently working on varieties of niches in the form of books and videos on banking, meditation, motivation, music and varied topics on personality traits and attitudinal effects on behavior exploring human psychology.

Be the first one to write a review for the book BUILD BETTER VERSION OF YOURSELF.

One Life Many Journeys
Nilima Amit

The God Of Moments
Jigar Naik